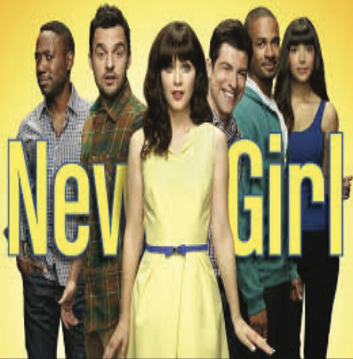 All of my friends have been pressuring me to watch this series for weeks, and considering that some of my favorite television series consist of sitcoms such as The Office, Parks and Rec, and 30 Rock, lots people told me that this show would be one right up my alley. Seeing that I had some time on my hands over Thanksgiving break, I decided to give New Girl a go. Please keep in mind that when I am reviewing this television show I have not watched past season one, so don’t worry about any spoilers!

I thought that this show was really funny from the pilot episode on. Jess, the quirky, outcast protagonist, finds roommates at the last minute after leaving her cheating boyfriend behind. She finds herself moving into a Los Angeles bachelor pad of three guys in their late twenties, all of whom are a little resistant to her moving in at first but she soon begins to grow on them. The humor is mainly based on really weird and petty conversations or arguments, which was refreshing and unpredictable compared to other sitcoms that have aired roughly within the last twenty years.

However, I find myself watching New Girl not for the main character, Jess, but for the supporting characters, her roommates. I do think that Jess sometimes has some pretty good one-liners, or will do something that is pretty funny. But for the most part, Jess’s character can get so painfully cringey and awkward that she is painful to watch. I am usually a fan of awkward characters, but that is usually because I am for the most part an awkward person and the humor is mostly relatable to embarrassing things I have done. Jess’ humor is not relatable and is for the most part just trying to be silly. It lacks a lot of subtle nuance. But then again, this could be because I have only watched the first season, and characters have yet to fully develop.

Personally, I would give the first season three out of five stars. It gets a little hokey and painful to watch at times, but I that is most likely just a result of not having enough episodes for character development. I am still going to keep watching to see how everything continues!