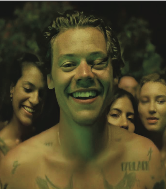 Harry Styles’ critically acclaimed album Fine Line has dominated music charts and social media platforms across the country. Fine Line entered the Billboard chart on Dec. 28 in the number one slot and stayed there for two consecutive weeks.

Certified gold in the U.S., the album spawned two top 30 hits, including lead single “Lights Up” and “Adore You.” A week after its released, Fine Line received 52 million streams and sold over 38,000 copies.

After the success of his first studio album Harry Styles, expectations were set high for what the former boyband member would release next.

The album samples sound from 80s pop along with contemporary Indie influence. This new album breaks away from his rock influenced sound, particularly noted in his 2017 self-titled album.

Apart from Fine Line’s new sounds, Styles shows off his new public persona and fashion. In the music video for “Lights Up” he is in a crowd of people shirtless and sensually dancing. Both men and women dance on him, as he sings the lyrics, “Step into the light. So bright sometimes. I’m not ever going back.”

Audiences assumed that the single was Styles’ way of possibly coming out as queer. The video has received almost 50 millions views on YouTube.

Additionally, Styles took on a new style—presenting himself in traditionally non-masculine clothing and painting his nails.

Fans speculate that most of Fine Line details his former relationship with Victoria’s Secret model Camille Rowe. Songs like “Cherry” and “Watermelon Sugar” reference specific aspects of their relationship (“Cherry” even samples a piece of voicemail message from Rowe to Styles).

I never had interest in Styles or his music before Fine Line. As a middle schooler, One Direction annoyed me so much and Styles was my least favorite member. However, I respected his self-titled album from 2017 because he finally broke out of his cheesy boyband persona. Whenever he released the music video for “Lights Up,” I was hooked.

The first four songs on the album are all bops. They all make me want to dance, and the pop-Indie sounds give off peaceful vibes. After “Lights Up” (the fourth song), the album takes on a more somber tone. The ballad “Cherry” documents Styles’ struggles with his breakup, as he sings “Don’t you call him baby. We’re not talking lately. Don’t you call him what you used to call me.”

Anyone who has gone through a breakup will definitely feel their heartstrings tear as Style sings about the pains of failed relationships.

To be honest, the rest of the songs on the album are decent, but not as good as the first five. However, I do appreciate the mix of sounds that Style’s incorporates into them. The last song, “Fine Line” is an emotional closure to a powerful album. His lyrics “I don’t want to fight you. And I don’t wanna sleep in the dirt. We’ll get the drinks in. So I’ll get to thinking of her,” shows his final complications with moving on from his previous relationship. Additionally, the melody has the potential to make audiences shed a tear.

Overall, Fine Line is Styles’ best work and propels him into his newfound identity. I highly recommend this album to anyone looking for something new to check out.