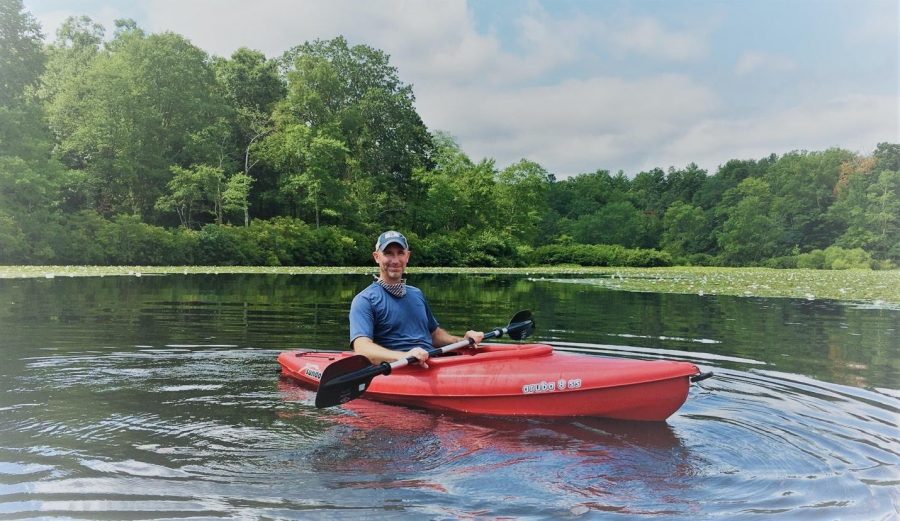 Professor Arnold is a professor in the Biology Department at Dickinson. He currently teaches an introductory ocean ecosystems course and is involved in research.

Before becoming a professor, Arnold attended St. Mary’s College of Maryland, a small liberal arts college, where he obtained his bachelor’s degree.

Arnold emphasized that even as an undergraduate student, he already had a passion for research. As a sophomore, he was granted permission from the college to drive a boat on the St. Mary’s river and collect water samples to monitor its health. Arnold also took a class trip to Trinidad, where he further solidified his appreciation for research. “Once I saw what was underwater, [and] I saw a coral reef, I knew that would have something to do with what I was going to do for my career, and what I studied for research.” He particularly loves the ability to learn about a natural environment and share the work with others.

When asked when he realized that he wanted to become a professor, Arnold credited his professors at St. Mary’s College and the opportunities he was given there. “I could earn my way into actually teaching labs and giving the 15-20 [minute] lecture before.” Given this experience, Arnold realized that, “[professors] had freedom to study what they thought was cool and share it with people. I can’t think of any better job to share what you find [with others].”

Arnold taught biology courses at the College of Charleston for three years, but, “… it was more of a university than a small college, and I wanted to focus mostly on teaching,” which led him to begin his teaching career at Dickinson in 2002. He first learned about Dickinson because his spouse had family in Carlisle. He recalls his first classes being, “Plant Physiology,” and an introductory biology course, taught in conjunction with Professor of Biology, David Kushner.

When asked about his favorite thing about Dickinson, he emphasized that the college supports professors when they propose their own ideas. Dickinson allowed him to found the Global Scholars Program, where a professor travels to a study abroad site with students to complete a project. Through the program, he went to the University of Queensland in Brisbane, Australia, to conduct research with students near an acidic spring. “That will always be one of the highlights of my career,” adding that, “… we went to this totally new place, did a project, and got it published with student co-authors.”

Outside of class, Arnold enjoys spending time with his family, going on runs, and hiking. He also undertook a special project of building a car with his family. He purchased an old Volkswagen Beetle and, “… took the entire car apart, every single bolt,” only to realize he needed a second car as well. “Now we have a 1973 Super Beetle!” He admits that the project did not make much sense logically, but it was fun to complete with his family.

Professor Arnold is looking forward to being back on campus with students and working collaboratively in the lab again.