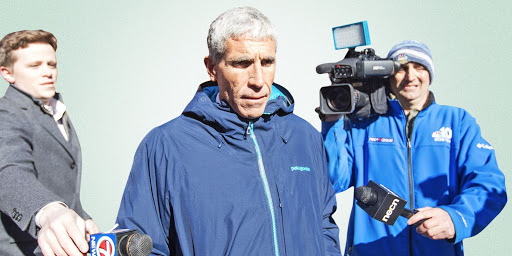 Operation Varsity Blues: The College Admissions Scandal follows the college admissions scandal of 2019 in which many wealthy families were discovered to be buying their students’ spot into top universities.

Seniors in high school right now are just finishing up the college admissions process, which is undeniably a stressful time. Students are constantly in a state of panic waiting for test scores, trying to do well in classes, and anticipating those vitally important decisions. So, in 2019, when the enormous college admissions scandal broke, it hurt a lot of people putting hard work into getting into college.

The documentary focuses on Rick Singer, the mastermind behind the scandal. He was a basketball coach who left that career path to focus on a new life–the life of buying college acceptances. According to Esquire, “In total, 50 people—33 wealthy and influential parents, two SAT and ACT administrators, one exam proctor, nine college athletics coaches, and one college administrator—were chf

Rick Singer was able to pull this off by starting a college counseling service called “The Key.” Here, he would get in contact with influential parents to convince them that one, their student would not get into college without his help, and two, the “side door,” as he called it, is the most ensured way to get into college. In one of his operations, he would have a friend proctor said student’s exam. After the student finished the exam, the proctor would run over it and correct the answers to make the score as high as they wanted it. The other part of his operation is bribing the athletic directors. With this, he would photoshop photos and fake reports in order to make it look as though said student played a sport, and then bribe the athletic directors at the school they wanted to attend. Because athletic directors have full discretion when choosing students they want on their teams, this was an easy way in for Singer.

In 2018, a tip to the Federal Bureau of Investigations (FBI) led them to Rick Singer, causing them to secretly record his phone calls for months. One thing the documentary does well is the reenactment. The movie is set up so that we get to see phone calls that were secretly recorded being reenacted by actors to make it feel even more real. As the story unfolds, we see the Singer fully incriminated himself with the phone calls for so long that the role he played was undeniable. When he was caught, instead of closing up, he agreed to help the FBI by using a wire and making his clients admit to their role in the scheme. After a few months of this, the case was airtight. As previously stated, the FBI caught many of the parents involved and they were almost all charged.

This documentary was so interesting to me. I personally did not know much about the scandal, so this revealed a lot of interesting information. It also revealed a lot of the ways that college admissions scams students and caters to the rich. I think this was an important documentary to make because it might enlighten people to the secrets and problems of college admissions. You can watch Operation Varsity Blues: The College Admissions Scandal on Netflix now.