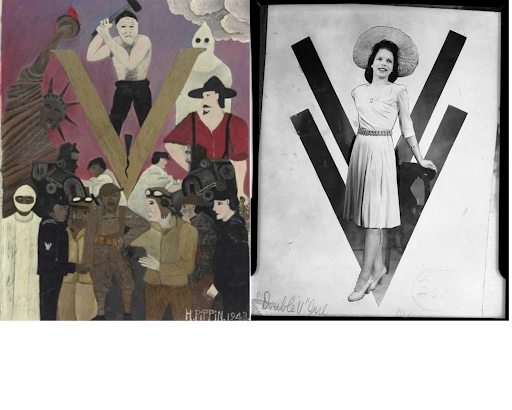 “Horace Pippin: Racism and War” debuted in the Trout Gallery on Friday, September 24th. The exhibit, open until Feb. 19, 2022, centers around Pippin’s painting “Mr. Prejudice,” on loan from the Philadelphia Museum of Art through the Art Bridges program. The gallery supplements that work with posters from both World Wars, notes from Pippin’s war experience, and photographs by Charles “Teenie” Harris, documenting the “Double V” campaign. An audio tour of the exhibit, voiced by Lilly Eidelberg ’24, accompanies the artwork.

“Mr. Prejudice” measures only 18 inches by 14 inches, but Pippin’s take on the intersection of war and racial discrimination is the defining work of his career. Phillip Earenfight, Dickinson Professor of Art History and director of the Trout Gallery, feels that, “it is a powerful painting; it does not hold back its punches.” He says the Trout Gallery has been trying to highlight both African-American art and pieces that focus on social issues, noting that those efforts reached “a fever pitch around the Black Lives Matter protests and the death of George Floyd.”

According to Earenfight, the exhibit almost did not happen. The gallery originally wanted to open the installation in the Fall of 2020, but pandemic restrictions derailed that plan. Instead, they unveiled digital programming for Dickinson classes and area schools. During the delay, Earenfight thought that the exhibit would fall apart, but he and his coworkers at the Trout Gallery managed to keep it together. “All of our partners were just so fantastic,” he says, citing the flexibility of the Philadelphia Museum of Art and the Smithsonian Institution, both of whom contributed pieces to the exhibit.

Now that the gallery has been able to open the exhibit, its merits are clear. After viewing “Mr. Prejudice,” Ariana Allen ’25 said of Pippin, “the fact that he never received any formal training, but was still able to produce such a striking piece is incredible.” The gallery’s decision to include Harris’s photos and other paraphernalia related to the “Double V” campaign was also intriguing to Allen. She noted: “we were never taught this in school. I actually had no idea what the ‘Double V’ campaign was until just now.”

That was exactly the type of sentiment that Earenfight hoped the exhibit would create among students and other members of the college and Carlisle community. He hoped that the works of Pippin, Harris, and others would fill in some of the gaps in the collective knowledge of the history of racial discrimination in the U.S. “There are a lot of messages,” he says of the exhibit. He wants visitors to “reflect on the efforts that were made in the civil rights era, where we are now, and where we have failed.”

“Horace Pippin: Race and War” is a powerful exhibit by itself, but Earenfight was also excited to announce another Trout Gallery showing, “Tracing Slavery,” that will open on Oct. 22. “Tracing Slavery” will pair a series of cut silhouettes by Moses Williams, a Philadelphia-born enslaved artist in the 18th century, with the work of contemporary artist Kara Walker, whose silhouettes and other artwork have been displayed across the globe. “Tracing Slavery” will also be made possible by the contributions of the Philadelphia Museum of Art through the Art Bridges program.

Scans of full version of Pippin notebook on display in the Trout Gallery: https://www.aaa.si.edu/collections/items/detail/horace-pippin-memoir-his-experiences-world-war-i-7434