The Storyteller: Tales of Life and Music by Dave Grohl 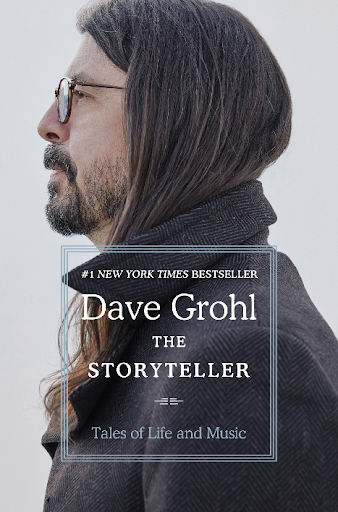 Two-time Rock and Roll Hall of Fame inductee Dave Grohl released his first book, The Storyteller: Tales of Life and Music in Oct. 2021. The Storyteller is a memoir looking at the highlights of Grohl’s life as his love of music blossomed, his time in Nirvana and the Foo Fighters, and the small moments that made a colossal impact on his own life.

The book begins with stories of Grohl’s early life and how he got into the punk rock scene in the Washington D.C. area, and with a lot of support from his mother, ultimately started performing on the drums as a teenager. It then goes into his time starting to tour professionally with the band Scream, where he ultimately found Krist Novoselic and Kurt Cobain fresh from Nirvana’s first album Bleach. It then follows his three years in Nirvana until Kurt Cobain’s death, and how Grohl was able to cope with his loss through his music in projects that would ultimately lead to the creation of the Foo Fighters. This time also helped Grohl to move past his “the guy from Nirvana” phase and make a musical identity of his own, one that even led him to performing at tribute concerts in front of two American Presidents. Throughout there are also stories of his time growing his family with his wife and three daughters, and the organized chaos that is living a normal family life as a world-famous rock star.

There were many stories told in the book, some hilarious, others inspiring. However, two stories in the book that really stuck out to me as the most powerful were Grohl learning of Cobain’s death, and the father-daughter dance with daughters Harper and Violet. The chapter “He’s Gone” opened with Grohl learning that his bandmate Kurt Cobain just died, and how as his first experience with death, this phone call absolutely destroyed him, especially because he had just seen him before at their last concert together in Munich. However, Grohl got a call right afterwards that Cobain would make it, and that the drug overdose did not kill him. Unfortunately, a month after that incident, Grohl got yet another call with news that Cobain had taken his own life in his home. Grohl’s writing really helps to put the reader in his shoes, as there is a whirlwind of emotion before you find out that he is talking about Cobain’s overdose rather than his death. It creates much of the same feeling for the reader that Grohl had upon receiving the news and helps them understand how he was able to cope after it finally hit him that Kurt was gone. The other story that really stuck out to me was when the Foo Fighters were planning to go on tour in Australia, the band’s favorite place to perform, but it ended up overlapping with his daughters’ school’s father-daughter dance. The shows were too far into planning to be cancelled, and a dance for his two daughters at the time was something he absolutely could not skip. Rather than miss a show and disappoint his fans or miss the dance and disappoint his daughters, he took a fourteen-hour flight from a show in Sydney to Los Angeles, going to his daughters’ dance, and then turning around and landing back in Australia after another fourteen-hour flight just in time for his next show. This story really hit me as it exemplifies the love of both his music and family that is illustrated throughout the book.

I listened to The Storyteller as an audiobook, read by the author, which comes with an additional chapter called “Entering Valhalla” where he discusses meeting several of his lifetime heroes at the Concert for George, a tribute concert for the late former Beatle, George Harrison. I feel that this is the best way to digest this book, as it makes the stories feel far more alive hearing Grohl talk about them himself with his own inflections. Ultimately, The Storyteller is an incredibly enjoyable roller-coaster of a memoir, going between the highs and lows of Dave Grohl’s life, and showing how his love for his family, friends, inspirations, and music crafted him into the legendary musician he is today, while also keeping him from developing the ego that so many other celebrities have and letting him live life like any normal person would.