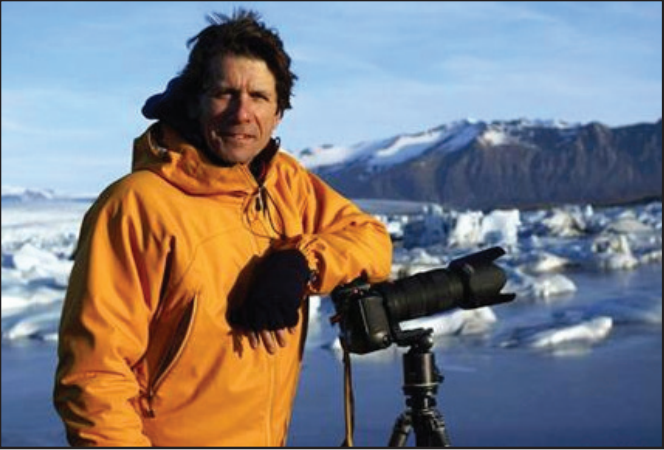 James Balog, pictured above, will be presented this year’s Rose-Walter’s Prize on Sunday, May 18.

Author, scientist and award-winning photographer James Balog will be awarded this year’s Rose-Walters Prize for Global Environmental Activism. The prize will be presented during the Commencement Ceremony on Sunday, May 18.

The Rose-Walters Prize, presented by Sam Rose ’58 and his wife, Julie Walters, was created to place emphasis on reducing human impact on the environment. Rose and Walters decided to establish the prize at Dickinson College because of the school’s commitment to environmentalism and the environmental science program’s work to encourage responsibility for the protection of all living things.

Historically, each recipient of the prize is given $100,000 along with a short residency during the following academic year. According to Neil Leary, director of the Center for Sustainability Education, Balog’s residency will likely take place in the fall, but the dates have not yet been confirmed. During his residency, students will meet with him in small and large groups to discuss his work, art and science.

Balog will be the third recipient of the Rose-Walters Prize, following in the footsteps of journalist Bill McKibben in 2012, and the former administrator of the Environmental Protection Agency Lisa Jackson in 2013.

Balog acquired a graduate degree in geography and geomorphology from the University of Colorado and currently resides in the Rocky Mountains near Boulder, Colorado. He has been combining art and science for three years, and has become internationally known for the results of his photographic study of glaciers. The study done by his team was turned into the award-winning documentary Chasing Ice and the PBS/NOVA special Extreme Ice. Chasing Ice has been shown at the White House, the U.S. Congress, the U.K. House of Commons and the U.N. It has also been featured on NBC’s Nightly News, ABC’s Nightline, the Late Show with David Letterman, PBS’s Moyers & Company and Real Time with Bill Maher.

“Through his photography and film making, James Balog enables us to visualize global climate change, engaging our senses and touching us in ways that scientific data and discourse alone have not,” said Leary.

Furthering his work with glaciers and climate change, Balog is the founder of the Extreme Ice Survey and Earth Vision Trust and served as a representative for NASA at the UN Conference on Climate Change in Copenhagen in 2009.

Balog also has works displayed in dozens of public and private art collections and is the author of eight books, including ICE: Portraits of Vanishing Glaciers, Tree: A New Vision of the American Forest and Survivors: A New Vision of Endangered Wildlife.

In addition to being the third Rose-Walters Prize recipient, Balog was awarded the American Geophysical Union Presidential Citation for Science and Society, the Heinz Award and an honorary doctorate of science degree from the University of Alberta.

“His form of advocacy brings together science with visual art, exposing himself to physical hardship and personal risk, so that we see that climate change is happening now. It is not a threat that is distant in time, it is a threat today,” said Leary.