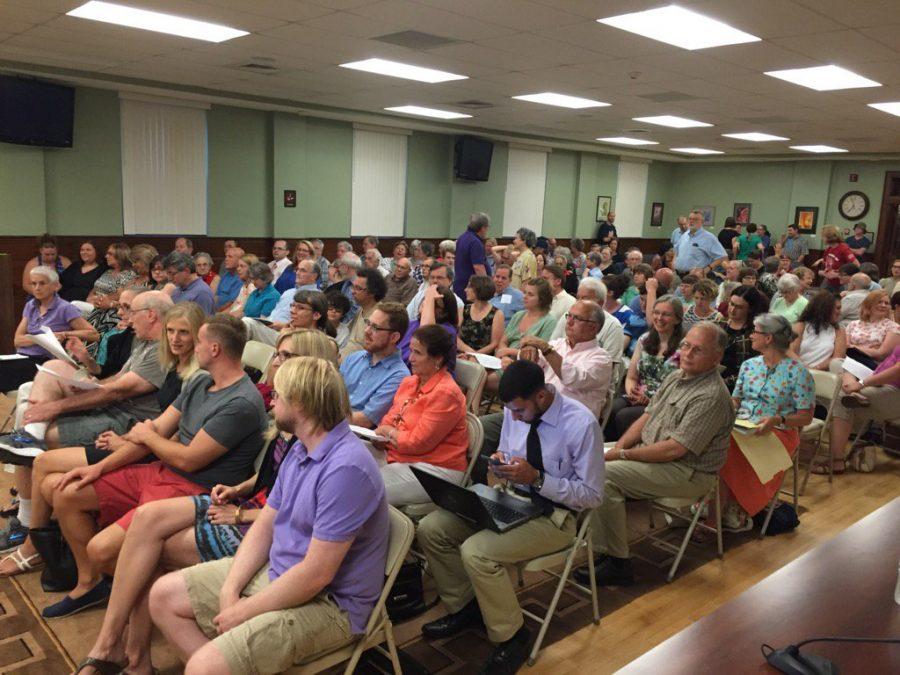 On Dec. 8, in a meeting at the Town Hall that drew Carlisle residents and Dickinson students alike, the Borough of Carlisle voted to pass the Anti-Discrimination Ordinance, restricting discrimination against any LGBTQ person regarding housing, employment and public accommodations.

Encouraged by Dean and Director of Student Leadership and Engagement Josh Eisenberg, Sarah Zimmer ’17 and Caitlin Smith ’17 organized the Peace, Rally and March event, which took place the same night.

The evening began with over 100 students and faculty gathered in the Stern Great Room awaiting speakers to arrive while Alex Dillion ’17 played guitar and people sat on the floor making colorful signs. After listening to Interim President Neil Weissman speak on the importance of passing the ordinance, students, alumni and guest speakers marched to the Town Hall before the 7 p.m. council meeting began.

“Benjamin Rush made this college so that students could participate in local governance,” stated Weissman as he thanked the students and faculty for attending this event.

Ted Martin ’87 spoke stating “It’s special because it is Carlisle, when I look back on those times; I was a scared gay man… To be here with you while you are fighting is a remarkable moment. PA is the only state in the entire North East where you can fire someone for being gay.”

Members of the Pennsylvania Youth Congress Jason Landau Goodman and Tara Stark attended the march and the meeting alongside Dickinson students. The Pennsylvania Youth Congress is the state’s first and only statewide LGBT youth organization committed to making sure that LGBT youth have a voice in local and state government, stated Goodman. Goodman was excited to see students being engaged in the civic process and was eager to support the event.

Walking down High St. chanting “no toleration for discrimination” and “Dickinson, what do we want? The passing of the ordinance,” the group headed to the Town Hall.

After standing outside and trying to light candles despite the wind, the group continued to chant before making their way inside the Town Hall as the meeting began. Packed to capacity, the Council opened the floor to speakers.

Almost two hours of speakers were heard as members of the council countered and supported the statements being made by the crowd. After loud applauses, screams and sparse clasps, the council voted to pass the Anti-Discrimination Act.

Erica Keim, a resident of Carlisle explained that she, “as a white women had not been subject to any of the discriminatory things that had been happening in the community and have recently become woke to the things that you don’t recognize as discriminatory.” She further explained that she was raised in a strictly religious home and up until recently has found freedom and therefore has become more aware of other people and stated that her strict religious up brining, which was rooted in fear, was unnecessary.

“I want to embrace everyone, I want to let go of all of that,” she said.