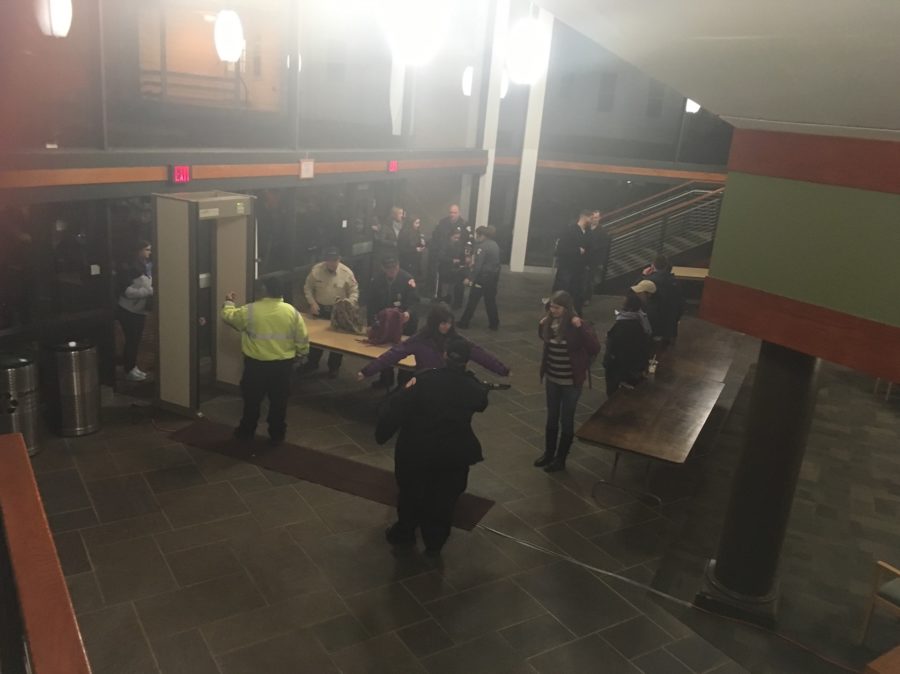 The event required attendees to pass through metal detectors, as well as get their bags searched, before entering ATS.

A Clarke Forum event on February 16 saw an unusual amount of security in light of recent disturbances at Clarke Forum hosted lectures.  Dr. Lester Spence, an associate professor of political science and Africana studies at Johns Hopkins University, was invited to speak about neoliberalism and the downfall of democracy

Numerous Department of Public Safety (DPS) officers conducted searches of bags and screened attendees. Attendees were also required to pass through a metal detector. In an email, Chief of DPS Dolores Danser said, “After consultation with the Clarke Forum, and taking in to consideration activity at recent Clarke Forum events, the college made the decision to increase security at last night’s event.”

While usually DPS does not use undercover officers, two DPS officers did wear civil clothes at the lectures.

“We don’t use undercover officers. Capt. Mike Guido and Officer Jill McGeehan were there in regular clothes, but everyone knows them and neither did anything to hide that they were there and representing DPS,” said Danser.

However, the extra security measures did not mean lesser crowds for the event. The talk, entitled  “Trump, Race, and the Slow Death of Democracy,” attracted a massive crowd, with every seat available being filled. Extra seating had to be opened to accommodate the crowd. Zita Petrahai ’18, the project manager at the Clarke Forum for this event, predicted the talk would focus on “how neoliberalism is on the downfall, how the Democratic party has focused their campaign less on the white working class and more so on minorities. I think there may be community member who [will] disagree with Spence’s message, but I think this could facilitate a lot of discussion around the topic.”

Before the event, Kevin Ssonko ’20 said, “I’m the most excited about this presentation, about this Clarke Forum, and I’ve been to a lot. This is a very hot button topic we’re tackling here.”

Spence began his talk by displaying a graph, looking at the income gap between the rich and poor in the U.S. He pointed out how the gap declined rapidly following the Great Depression and the beginning of New Deal style policies. Spence noted that, before FDR, the government respected the idea of “negative freedoms.” This idea means that if people did something the state did not agree with, they were not punished, but that there was little concept of “positive freedoms,” in that if the people were not well off, the state did nothing to help them.

“If you had outlived your usefulness in the economy, the government wasn’t there for you.” Spence then listed a number of policies that came into effect as part of New Deal style policies, including Medicare, Medicaid, the GI bill, welfare, Social Security and the expansion of labor rights.

However, when the economy experienced trouble in the 1970s, characterized by both inflation and economic stagnation, a rise in neoliberal policies occurred. Neoliberalism, according to Spence, has the goal of “reducing ability of labor to organize, reducing size and scope of welfare state, privatizing a range of public goods and reducing the government’s ability, at a range of levels, to collect taxes.” The promotion of neoliberal ideas happened beginning with the Reagan administration. It was at this time that inequality began to increase, and union membership began to decline. Spence then displayed a graph, which showed a rising level of productivity from the 1920s to the present. The graph also demonstrated that wages stopped rising with productivity in the mid 1970s. “We’re working longer and longer hours, our wages have flat lined, our responsibilities have increased,” he maintained.

Spence attributes this, at least partially, to the decline of manufacturing jobs and the rise of the “FIRE” economy in the U.S. FIRE, standing for finance, insurance and real estate, are jobs that, in the past, generally required at least a bachelor’s degree, whereas many manufacturing jobs only needed a high school diploma. “The same population that would have gone into the manufacturing sector, is now being pooled, in state prisons.” Spence then asked the question, “How is it, that in a country that purports to be democratic… that we got to the circumstance that we are voting for policies that hurt us?” Spence answered here with the influence of media.

Speaking of the most recent election, Spence said “democracy is not a state, it’s a practice. It’s something we continually act, and reenact. Democracy requires…practice.” He made note of the large population in the country that distrusts both parties, and stated that these people likely moved towards Trump as he was an outsider in the presidential election. He also maintained that one of the reasons Trump won the presidency was that “Clinton was a weak candidate,” at least in part due to her support of rightist policies in the 1990s. Spence said he found it difficult to vote for Clinton, and that it took him over ten minutes in the voting booth to do so, because of her support for policies that “increased inequality for all of us, and especially racial inequality.”

He also made note of voting restrictions.

“If you have a dynamic in which everybody is required to vote, you have far less inequality. The more open voting is; the more inequality is reduced.” He denounced voting restrictions, claiming that they hurt “poor populations, populations of color and student populations.” In examining the racial issues associated with voting, Spence looked to mass incarceration, noting that the U.S. has 4% of the global population, and 22% of the global prison population.

“In a number of states, if you are in the joint, you can’t vote, if you’ve got a record, you can’t vote. Black voting percentages drops 70-80%.” In summing up his talk, Spence said “Democracy functions when people have this healthy skepticism.” He then mentioned how the American people are losing their skepticism, and that they are starting to normalize their current situation.

“In Baltimore, 1 out of 4 municipal employees are police officers. If it were a nation, we’d consider it a police state; police states don’t have a lot of democratic elements,” he said. “We have to create spaces where we disagree. We’re starting to normalize Trump’s behavior. We may already be past the point of no return.”

Nicholas Rejebian ’17 thought that Spence’s message was aligned with Dickinson’s philosophy. “The message is the same. Going out to make positive change, is [kind of] what we are here for. It’s important that we take advantage of lectures like this.”

After the talk, Spence said “There’s a lot of energy in the room. I think it was a really really good conversation. I’m really thankful that the Clarke Forum exists. We need spaces like this.”

More information about the Clarke Forum and its lectures can be found at www.clarkeforum.org.