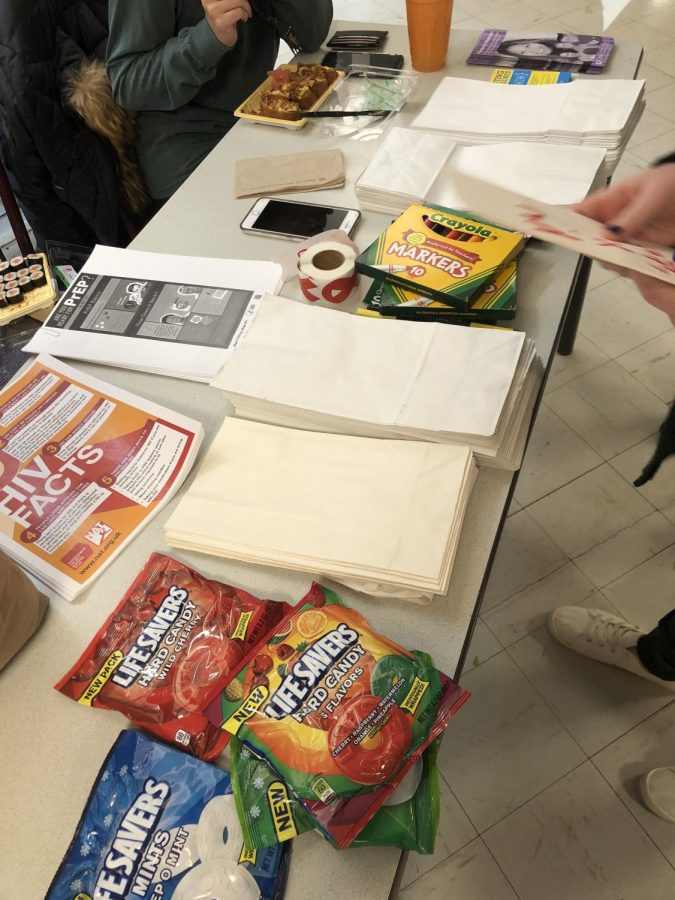 A Dickinson organization seeks to raise awareness and destigmatize HIV/AIDS as new statistics from the World Health Organization showing 36.9 million people are living with the disease.

The organization People Assisting Learning about Sex (PALS) held an informational table for World AIDS Day. The table, which was held on Nov. 29, included resources regarding safe sex, contraceptives and an activity of writing messages on white-paper bags to show honor and support for the AIDS community.

Ginna Etah ’19, who became involved with PALS her sophomore year and now serves as their president, hopes to bring awareness to the Dickinson community regarding safe sex and HIV/AIDS. Etah said, “a lot of people hear about STDs, STIs, HIV/AIDS and its just kind of an abstract thing, versus understanding how you can be active in your own life in protecting yourself and protecting your partner.”

Etah also explained that safe sexual practices are important because of sharing one’s body with another person. “It’s about looking out for the community as a whole,” she explains. “We just want to make sure everyone on campus is aware of the campus’s resources for contraceptives and that everyone has an understanding for safe, consensual and healthy sex practices.”

For Gabrielle Corti ’19, secretary of PALS, she hopes spreading awareness of HIV/AIDS will help destigmatize the topic. “The bags are a way for the Dickinson community to support the AIDS community at large…it’s just our way of standing in solidarity for people affected with AIDS,” she stated.

Modern HIV treatment prevents the disease’s development to AIDS and allows HIV positive people to live long and healthy lives. Properly treated people can reach a stage where they cannot pass the infection onto another person, according to Canada’s Source for HIV and Hepatitis C Information.

Students circulated around the table to participate in the honorary activity for the AIDS community. Carrie Becher ’22, wrote “Stay safe, use condoms” on her bag because she feels there’s a lot of stigma around the disease and wants people to stay safe, learn and show support for the community.

Julia Chandler ’22, wrote, “you are loved” on one side of her bag and, “AIDS does not define who you are, who you were, or who you will be” on the other side. She explained her message was written because, “…someone who finds out they have AIDS could be devastated. It’s important to make sure people realize that their lives are not over and that they’re not hopeless if they contract the disease.”

Rosey Pasco ’22, said that it is important for  Dickinson students to observe World AIDS day because “it’s good to be aware of problems throughout the world and not just present in your life.”

Aidan Pidgeon ’20, vice president of Spectrum, Dickinson’s queer student union, highlights the importance of recognizing World AIDS day to see, “…how destructive the disease has been for humanity as a whole, and to encourage and support research into a cure.” Pidgeon furthers that “…we’ve made huge strides in the fight against HIV/AIDS, and it’s important we continue to look for ways of preventing its spread and making life better for those living with it” he explained.

World AIDS day is internationally observed on Dec. 1 and celebrates 30 years of recognition this year.