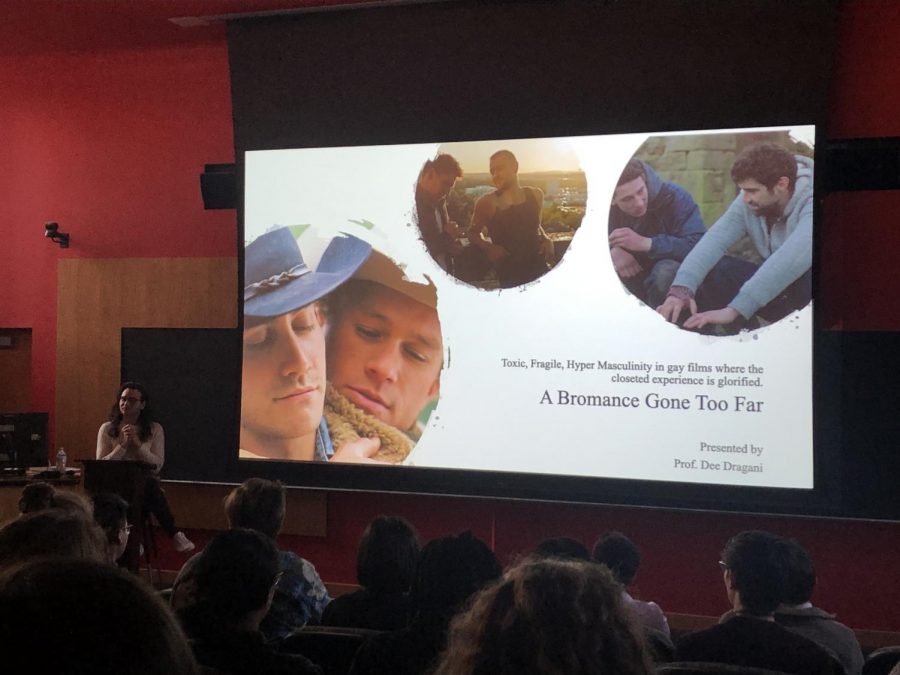 A large crowd of 50 showed up to an event on the portrayal of masculinity in gay films and media.

Dee Dragani, a visiting international scholar of Italian, presented her research on toxic masculinity among men and the gay community. Dragani focused first on masculine standards in the gay community, specifically straight-presenting men on gay dating apps and the exclusion of those who identify as non-white or feminine.

Dragani then explained her research on gay representation in film with mostly straight-presenting gays as protagonists and feminine-presenting gays in secondary and marginal roles.

She described three popular gay films – American film Brokeback Mountain, German film Freir Fall and British film God’s Own Country – as “The Perfect Bromance Film[s]” because of their hypermasculine contexts and over-sexualization of the characters. Dragani said instead the American film Moonlight had a “good representation” of a black, queer romance.

The presentation received positive remarks from audience members. Juliana Rhinehart ’22 said the talk was interesting and featured “things I haven’t really thought of before.” Rhinehart said, “I vaguely knew about the topic she was talking about, but not how deeply rooted they were.”

Erin Heeschen ’22 appreciated the “connection to common culture especially with the ‘masc4masc’ trend we see on apps like Grindr, which is really dangerous,” Heeschen said, referencing the phrase used by masculine gays to broadcast their exclusive interest in other masculine gays.

Heeschen said of film scenes that confuse intimacy and assault, “This kind of behavior is being normalized because this is the only media being produced about queer couples,” she said.

Ernest Entsie ’19, a pride coordinator for the office of LGBTQ services, said that Dragani’s presentation topic was often discussed in the office. “We see this on campus in discussions within our own communities…we see this on many forms of media,” he said.

Dragani’s presentation is part of her year-long independent research on masculinity in film.  Dragani became interested in masculinity among the gay community when she watched the film Frier Fall.

“My only goal is to make people think about…what is fearful on this topic, and why people are afraid to see the other side of the closet,” she said.

“A Bromance Gone Too Far? Toxic, Fragile Hyper Masculinity in Gay Films Where the Closeted Experience is Glorified” was hosted by the Office of LGBTQ services on Tuesday, March 19 in Althouse.