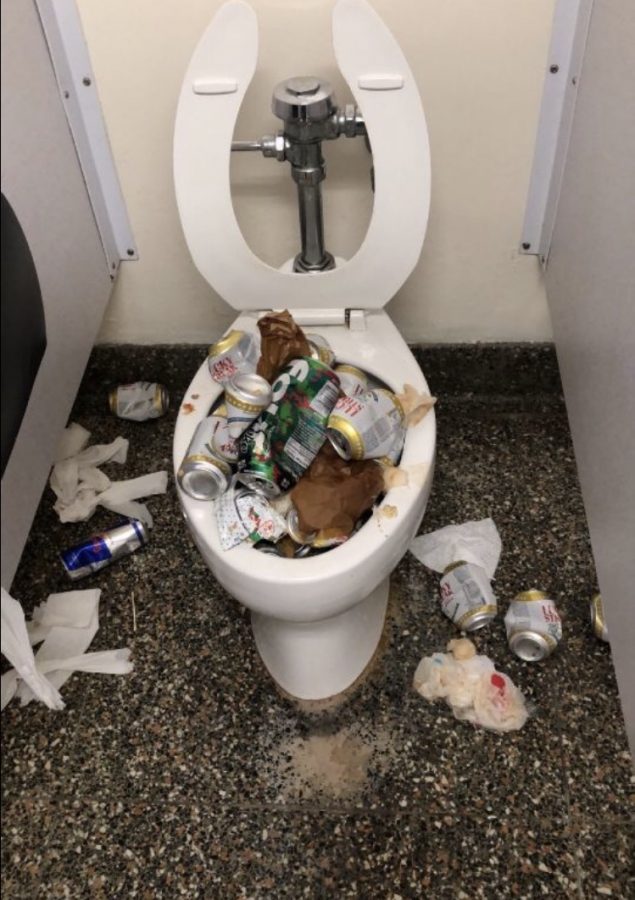 A toilet in a residential building was vandalized and filled with garbage on the evening of Saturday, April 13.

The toilet, located in the boy’s bathroom on the second floor of Drayer Hall, was overflowing with empty beer cans and food wrappers.

The issue was brought to the attention of Drayer residents by Sean Garofalo ’22, a resident of the second floor who came across the toilet the night it was vandalized. Garofalo said that he was “disgusted” by the condition, and he was “brimming with anger” with the person[s] who destroyed the toilet because they “just expected Cindy [Duffy, Facilities Management housekeeper] to clean it up.” Garofalo then shared the image of the toilet with other Drayer residents. Juliana Rhinehart ’22, another resident, said she was “grossed out” by a picture of the damaged toilet sent to her by a friend. “Cindy [Duffy] shouldn’t have to be responsible for cleaning it [the mess] up,” Rhinehart said when she initially saw the picture.

A work order was submitted to Facilities Management to clean the toilet on the night of the incident, according to Amanda George, director of Residence Life and Housing. Garofalo said he saw Drayer second-floor residents clean the toilet the following morning.

According to Dee Danser, assistant vice president of compliance and campus safety, the Department of Public Safety (DPS) was contacted about the issue on Saturday night. Danser explained that DPS officers responded the same evening and that DPS is “conducting a follow up investigation.”

When damage occurs within a residential building, the costs of repair or cleaning is either billed to the community or those individuals responsible (if proven guilty), according to Dickinson’s policy on residential damage under housing operations.

George said that in the event of damage to residential spaces, Residence Life and Housing seek “information to identify the responsible person(s) to hold them accountable.” According to George, DPS’s current investigation is still undergoing review.