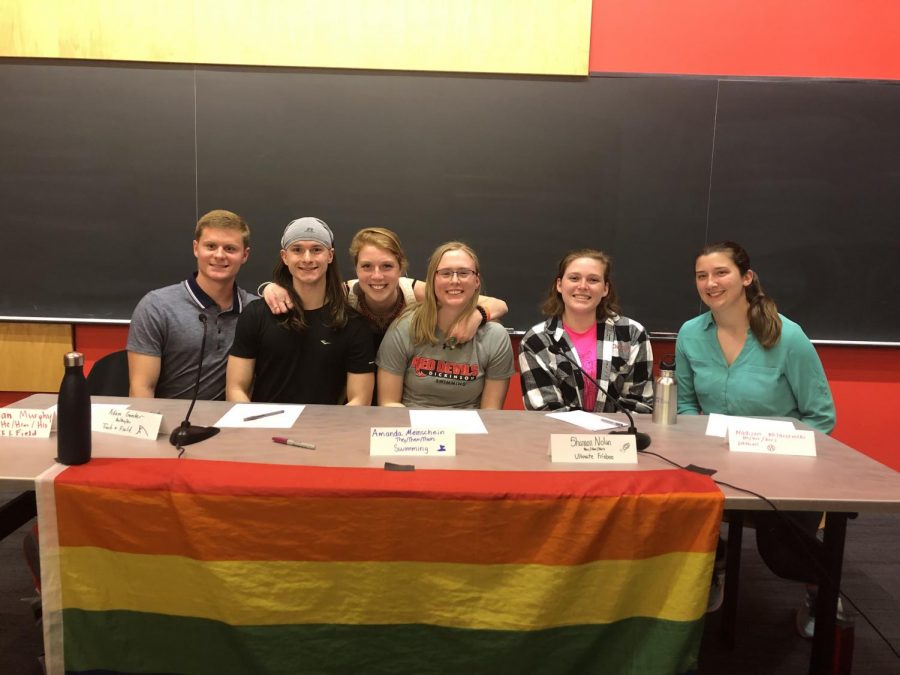 The panel, consisting of athletes from the swimming, track & field, club frisbee and softball teams, answered questions from the moderator, Olivia Lyman ’19. Lyman asked the panelists questions relating to their coming out experiences within their teams and their experiences presenting as openly queer in sports.

Lyman also asked the panelists questions on allied-ship and how Dickinson athletics can foster more inclusive environments for queer athletes.

Lyman said she was inspired to create the panel because she wanted to have an event on campus that explained the difference between toleration and celebration with the LGBTQ campus community. Her and Amanda Meinschein ’19 have both been planning the panel for the past year.

“I felt like the whole athletics department could do better, and I wanted to share with everyone that we can do better and what we can do to get better,” Meinschein said.

Attendance at the panel was not very high, but Lyman said that she was “still pleased.” She said that it was not the number of people who attend that mattered, but rather “what [those who came] take out of this [discussion].” Lyman stressed the importance of spreading information that the audience learned to those who did not attend the panel. “A lot of the panelists talked about checking people, calling people out, but also being allies and allied-ship,” she said.

Meinschein, who is on the swim team and identifies as gender-fluid, represented a non-binary athlete perspective to the panel. They said that their team divides between the sexes and that they “don’t really know what to make of being a gender-fluid athlete and what that means being on the team.” Meinschein then described their inspiration, Schuyler Bailar — the first openly transgender man to swim on Harvard University’s team and to play in an NCAA division one sport, and how they want to “be like him [Bailar] and share experiences with others on what it’s like to be a trans or non-binary athlete.”

Adam Gamber ’20, a panelist from the track & field team, said he wanted to be on the panel to share his story of being a queer athlete. “I never know who I’m going to help that might be in the audience,” Gamber said and explained that he wanted to be a resource for athletes who struggle to come out and who are unsure how to navigate the life of an LGBTQ athlete. “It hasn’t always been easy for me, especially in high school,” said Gamber, “so I want to make it easier for anyone else who may need it.”

The LGBTQ athletes panel was hosted by the Hera’s Society and the Office of LGBTQ Services on Thursday, April 18, at 7 p.m. in Althouse 106.