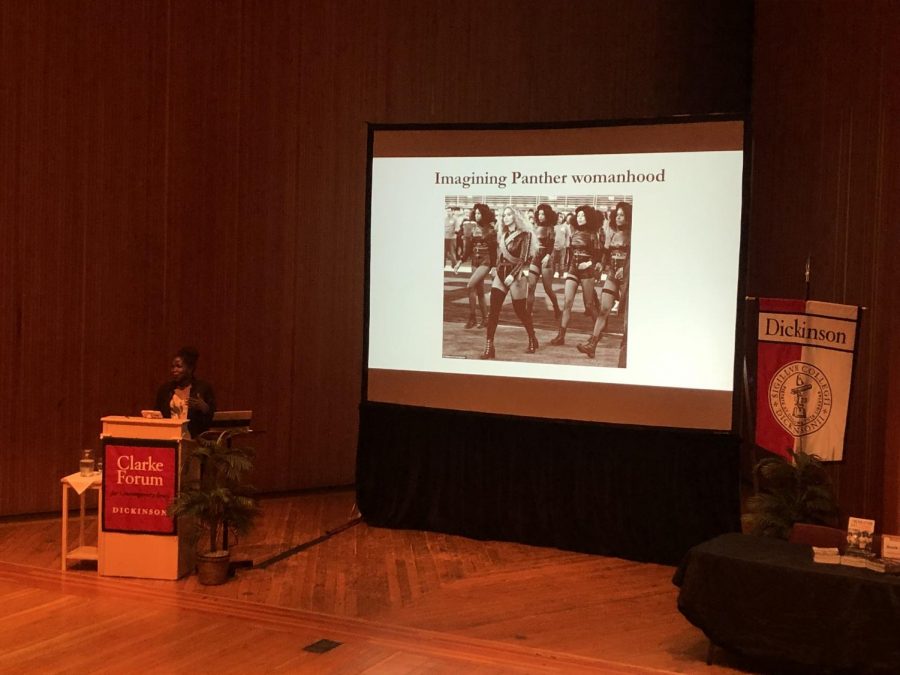 Historian Robyn Spencer of Lehman College, City University of New York, spoke at the first Clarke Forum lecture of the year to introduce the history of the Black Panther Party (BPP) and discuss how Black Panther women came to transform and define themselves.

Spencer’s work focuses mainly on the Black social protest after World War II, gender, urban and working-class African-Americans, according to the Clarke Forum website. Born and raised in a community of black people, Spencer had not been actively aware of racism until she came to college where she started to feel alone, different and insecure. However, it was this turmoil she encountered that prompted her interest in the legacy of the Civil Rights era and the stories of people who lived through social movements, which eventually drew her attention to the BPP.

According to Spencer, the BPP was founded in 1966 in Oakland, CA with the mission of empowering and finding justice for Black communities. Women joined in the spring in 1967 after repeated instances of police brutality. Spencer said that women were an integral part of the BPP, that they shook policies, that “women were thinkers.”

“Place matters,” she noted. Women were making both regional and cross-country relations, from Oakland CA, Los Angeles, Seattle, San Francisco and Berkley to the Asian and international Pacific communities. Together, Black Panther women spoke against rising issues in the United States such as the Vietnam War, the invasion of the Dominican Republic, and the decolonization of Africa. Women also had their own system of armed self-defense drawn from Southern traditions, the importance of which is, according to Spencer, to counter the misconception “that the women fed the child and the men defended.”

Spencer discussed how Black Panther women were taking steps by “putting out their own images, asserting themselves, leaving all sorts of archival traces behind.” She explained that in the context of vast criticism on the gender politics of the BPP and how women were too masculine, an image of men and women in unison “was doing something different in the whole history of the Black Freedom movement.”

Spencer elaborated on the everyday life and work of the BPP which underpinned their radical social and political positions. Women were the backbone of the organizational works that kept the BPP going, from giving out groceries to feeding children to clerical work to editing the layout of their newspaper. The educational vision of BPP also showed its support of Black Panther women, their motherhood, and family by establishing a boarding school with progressive education system to take care of the “Panther cubs.”  However, this was not to say that “there wasn’t conflict.” Spencer mentioned the reality that women’s ideology, dating relationship and pregnancy plan were in a way bounded by the organizational work of the BPP.

Spencer also drew attention towards the contemporary representation of black women in popular media images and entertainment, making a reference to the #SayHerName and #MeToo movement and expressing her content that “America is increasingly interested in thinking about the past.”

Students reacted positively to the lecture. “The talk was really interesting,” Nhi Ly ’22 said, “It produced me not only the information about the Black Panther Party which I had never heard of but also another aspect of female roles in the history.”

Black Power, Gender and the Black Panther Party was held on Thursday, Sept. 12 in ATS at 7 p.m.