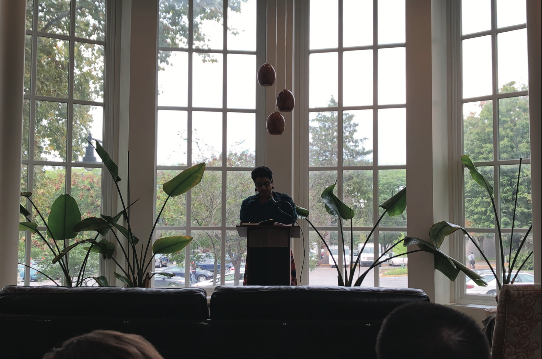 The departments of English and Africana Studies hosted a commemorative reading of the late Toni Morrison’s work due to Morrison being “one of the most influential American writers who’s ever lived,” according to Associate Professor of English Siobhan Phillips.

Morrison, who died on Aug. 5, was a Nobel-Prize winning novelist with published works that explored the “racial, unconsciousness in American thought and literature,” according to the Toni Morrison Society website. Morrison won the Nobel-Prize in literature in 1993 for her “visionary force” and “poetic import,” according to the Nobel Prize website.

Students and faculty were invited to share their favorite passages or quotes from Morrison and offered opportunities to reflect on the impact of her works.

Associate Professor of English Claire Seiler shared a passage from Morrison’s novel “The Bluest Eye” and described Morrison as an author who “grows with you [the reader].” Assistant Professor of English Sheela Menon shared a passage from Morrison’s literary criticism “Playing in the Dark: Whiteness in Literary Tradition” which was the same copy of the work Menon has kept since college.

Students in attendance were from both academic departments and listened to the commemorative readings. English major Audrey Schlimm ’20 explained that she enjoyed listening to professors share how they connected to Morrison. Schlimm, who read Morrison’s 1987 novel “Beloved” said that it was “one of the most significant world-view changing books that I’ve ever read.”

Phillips said she created the event to offer a “space to come together and share her [Morrison’s] words and [reflect on] how those words meant something to us and to mark the importance of her legacy.” Phillips reflected on Morrison’s literary contributions and said that she “not only offers her amazing legacy and words, but she also prompts you to read everything else differently.”

Associate Professor of Africana Studies Lynn Johnson read a passage from Morrison’s novel “King Solomon” and mentioned the importance of Morrison’s inclusion of African-American characters for African-American audiences. She said she appreciates that Morrison “doesn’t feel the pressures that so many African-American writers before her time felt because in order to become published you had to conform to norms and practices of white publishers.”

Johnson, who teaches a senior seminar on Morrison every other year, said that Morrison’s works and legacy has helped her formulate her class structure to offer Morrison’s work to a wider audience. “A lot of her works speak to traumas that African-American people have gone through,” Johnson said, “so just to be able to articulate that it has happened to you and to be able to garner this listening audience to help you work through your trauma because to have an audience is really important for any type of healing.”

Johnson also commented on Morrison’s actions to inspire people of color to reclaim their agencies. “It’s also amazing the way Toni Morrison has said that she basically stood on the periphery and the center came to her,” Johnson said, “and I felt like what a powerful statement to know because even in the margins people of color still have agency and they’re occupying their own center in the periphery.”

“Commemorative Reading of Toni Morrison’s Work” was held on Monday, Sept. 16 at 4:30 p.m. in the Stafford reading lounge of the Waidner-Sphar library.