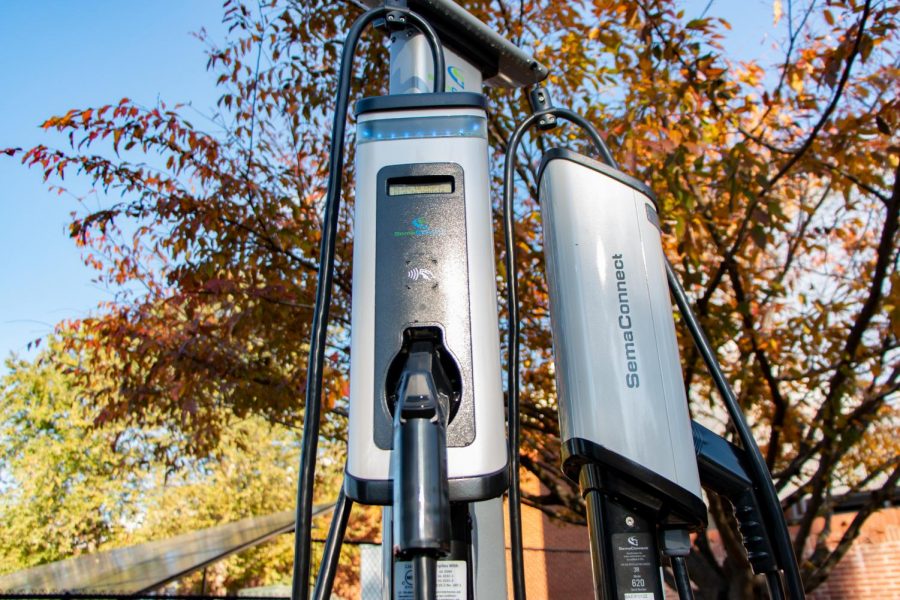 Installation of Electric Vehicle, or “EV,” charging stations are now complete and are in the Kaufman and ATS lots. These stations were installed to “accommodate those with electric vehicles” and to “help motivate people to purchase an EV,” according to Associate Vice President of Sustainability and Facilities Management Ken Shultes.

Shultes informed students of the new EV charging stations from via email on Wednesday, Oct. 9 along with their locations. Shultes added in the email that a third charging station will be installed in the ATS lot by the end of the month.

Plans for their installation started in fall 2018 after an increase of faculty and visitor interest in charging stations. A prospective parent during an open house event approached According to Associate Provost and Director for the Center for Sustainability Education (CSE) Neil Leary, about the absence of charging stations on campus. “[A] parent told me he had hoped to bring his child to Dickinson in their EV,” Leary said, “But they left the EV at home and drove a gasoline powered car because, at that time, Dickinson did not have any EV stations.” Shultes said that the PA DEP EV Charging Rebate Program helped to pay for 75 percent of the cost, according to Shultes. The EV charging stations were manufactured by Sema Connect, a Maryland based company that specializes in production of EV chargers.

There is a nationwide increase in EV usage and charging stations as people choose to invest in these more sustainable products. According to the EV charging network ChargePoint, self-described as the “largest” in the country, presence of their company’s charging stations on U.S. college and university campuses has increased by 35 percent this year. Shultes added a statistic by Bloomberg NEF that EV sales in the U.S. will increase by 25 million this decade.

The college’s investment in EV charging stations is part of its commitment to developing a more sustainable campus. According to Shultes, electric vehicles emit fewer carbon emissions than fuel-powered cars, and they are less expensive to maintain. Shultes explained that EV technologies are expensive, but that eventually prices will decrease as they become more popular with consumers. Additionally, these EV charging stations will help to incentivize sustainable behaviors by reducing carbon emissions on campus with “employee commutes and eventually fleet vehicles,” he said.

Students have mixed reactions to the EV charging stations, with some praising the college’s sustainable efforts and others questioning the need for them on campus. Mac Khoury ’22 said she appreciates the presence of EV charging stations on campus because “back in Chicago, they offer electric charging on University campuses so that the faculty can charge it at work and incentivize them to get one…it made my uncle get one and he works at Northwestern [University].” Sam Walters ’22 said she understands the sustainable aspects of the charging stations but that they do not seem like a good investment because “I feel like not many students actually have electric vehicles and will not get significant use.” Noel Hricz ’21 expressed the same sentiments as Walters because she does not feel that there are many Dickinson community members drive EVs. “I haven’t seen any cars parked in the electric chargers since they’ve been installed,” Hricz said. She also expressed concern about the financial costs of the chargers, saying “[…] Dickinson gives off the vibe that they’re having financial difficulties at the moment and I’m not sure the chargers were a worthwhile investment.”

Mary Smith ’20 added “I’d want to know how much it cost to put them in and if it was worth it.”

The presence of EV chargers on campus will help support Dickinson’s status among colleges as a leader in sustainability. “Being able to support EV by installing EV charging stations is rapidly becoming an expectation for sustainable institutions and organizations,” said Shultes. They are now ready for use by students or faculty with EVs.