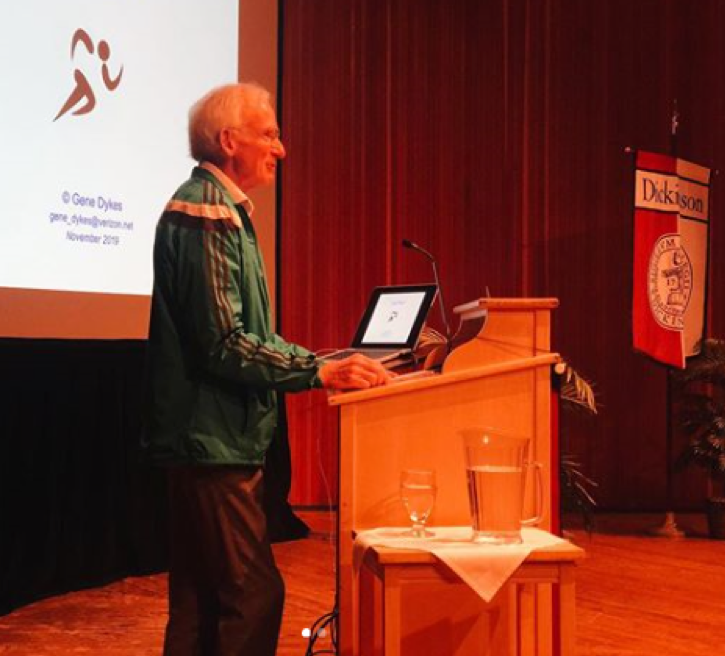 Gene Dykes introduced his “just -run” philosophy and how it can make running and life more enjoyable in a Clarke Forum on Monday, Nov. 11.  Dykes, nicknamed “the Ultra Geezer” is a life-long runner, more recently famous for running a record marathon time at the age of 71.

Recently his preference has been the longer distance, mostly focusing on the marathon distance while also competing in 100- and 200-mile races. His running career has been most successful in the past thirteen years, holding 14 age group records and has won 15 national titles. On Sunday, Nov. 3, Dykes participated in the New York City Marathon and won first place in his age group. In Dec. 2018, Dykes ran a marathon time of 2 hours 54 minutes and 23 seconds in the Jacksonville Marathon in Florida, beating the previous world record for the 70 to 74 age group by 25 seconds. Sykes time will not stand as the record however. Although the Jacksonville course that Dykes was running on was certified by USA Track & Field it had not been sanctioned by a USATF so the record stands as unofficial, which is required to for times to be ratified for records. That does not matter too much to Dykes, who focuses on his philosophy of “just run.”

During his talk, Dykes spoke about the specifics of intense distance running. Dykes delved into details down to equipment up to how to start running in the first place. Sarah Caron ’22 said she “learned a lot about a sport [she isn’t] very active in, specifically a niche that [she] knows even less about.”

In his talk, Dykes explained that he questions conventional wisdom, Dykes does not believe in stretching, weight lifting or cross-training to bolster his running. “The fact that he doesn’t do any of the things conventional coaches say to do makes me think a lot about other things that we are just told to do in life,” said Tyler Catania ’21. Dykes differed from conventional wisdom in just about every way possible, using training techniques that are neglected by other runners and drinking Coke during his races rather than water.

Dykes talked a lot about just getting out and trying something rather than over-planning or looking for a “magic bullet.” Dykes said to the audience that if they are inclined to improve at running, then they must get out and “just run” rather than search for the perfect pair of shoes or another workout that will make the improvements. Dykes’ “just run” philosophy can be used inside and outside of sport. “Dykes’ focus on just running can apply to a lot of aspects of life if I replace ‘run’ with study, workout, or be productive,” said Tenzin Crowley ’21.

This event took place on Monday, Nov 11 in ATS from 7:30-9:00. The talk was hosted by the Clarke Forum for Contemporary Issues and was co-sponsored by the Department of Athletics and the Office for Student life & Campus Engagement.