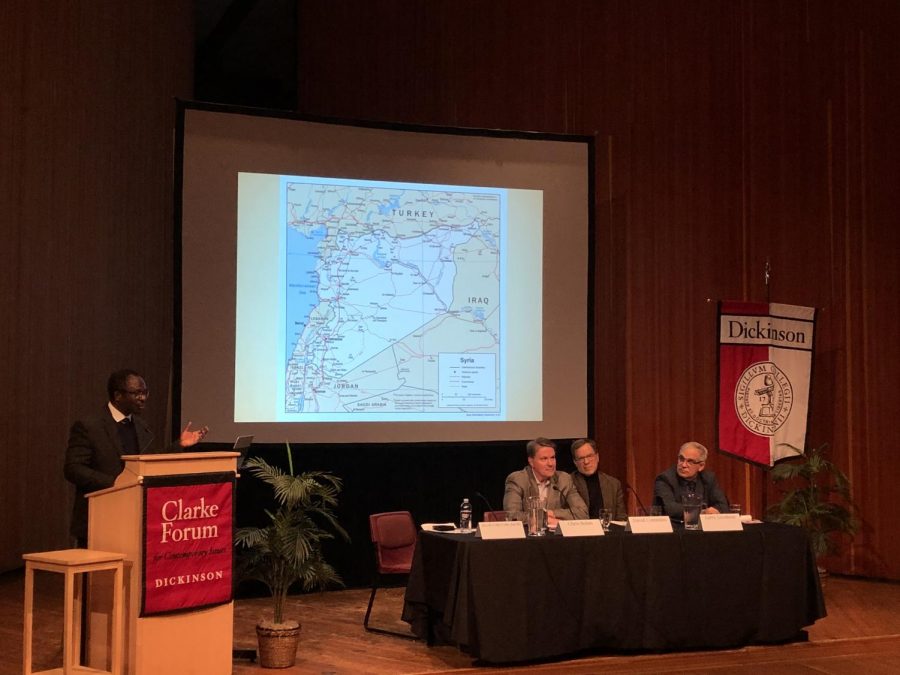 Students gathered to hear a group of professors engage in a panel discussion to clarify the effects of the withdrawal of United States military forces from Syria on the country.

Jacob designated each panelist 10 minutes to explain their research and arguments about the current state of Syria.

Goodson provided the audience with a background of contemporary Syrian conflicts. He recounted the history of Arab Spring in 2011 and the subsequent protests that followed in Syria. After the rise in power of the terrorist organization the Islamic State (ISIS), former President Barack Obama forced U.S. troops out of Iraq and into Syria to combat the group. Goodson attributed the longevity of Syrian conflicts and the civil war to Russian military influence in the country. Some Russian actions include executions of proxy wars in the Middle East/Eastern Europe along with cyber-attacks against the U.S. Goodson concluded his speech with an argument that the “U.S. never had a coherent policy in regards to Syria,” he said.

Bolan focused much of his speech on U.S. policy towards Syria and the challenges that arise with policy decisions. He claimed that U.S. policy faces two main issues in Syria—the U.S. has less vital interests in Syria than other inside actors and Syrian President, Bashar al-Assad, is a powerful figure in an advantageous position. Bolan argued that U.S. policy in Syria destabilized after the defeat of ISIS and suggested that the U.S. should deemphasize military influence and focus on diplomatic peace. “The U.S. is floundering in Syria,” he said.

Commins started his remarks with a recognition of the Syrian people’s lives and said that “what they have to go through is absolutely horrendous.” Like Goodson, he provided the audience with a background of the rise in protests in Syria after Arab Spring. However, Commins explained that the government forced people to protest violently after the torture and execution of peaceful protestors. He said that in Syria there is “no way to peaceful[ly] protest.” Commins then argued that due to the longevity of Syrian conflicts that Americans are not fazed by the current conflicts initiated by Turkey against Northern Syria, a region occupied by the Kurds, a minority group. He connected the invasion of the Kurdish region of Syria to contemporary nationalistic attitudes stemmed from racism in various countries. “The reformation of power struggles and violence continues,” Commins said.

The panel turned into a discussion between panelists, moderated with questions provided by Jacob. Around 80 people attended the panel, a majority featured students and faculty from the U.S. Army War College. Many attendees from Dickinson College were international studies, political science, and Middle East studies majors. Responses from students were positive. Josh Lesser ’20, said the lectures was one of the best lectures he has seen at the college. “I think it was very interesting to hear from the Army War College and hear different perspectives on the situation in Syria,” said Lesser. Stephanie Teeuwen ’20 enjoyed the different perspectives of the situation in Syria from U.S. Army War College faculty. Omer Siegel ’22 and Sam Halpern ’22 both agreed that the lecture was insightful. “[I]t was nice to see people from the Army War College to explain a more experiential view,” said Siegel.

Clarke Forum event supervisor for the panel Sara Duane ’22 explained the importance of hearing different perspectives of the situation in Syria. Project manager Amanda Sowah ’22 said it was important to have the panel discussion to “show we are trying to be inclusive of our community at large.” Assistant Rebecca Fox ’22 said that the event allowed Carlisle community members to learn more about the situation and to “hear perspectives of people who they may not normally get to listen to.”

“Breaking Issue: Fallout from the American Withdrawal from Northern Syria” took place on Thursday, Nov. 14 at 7 p.m. in ATS. The Clarke Forum for Contemporary Issues sponsored the event.