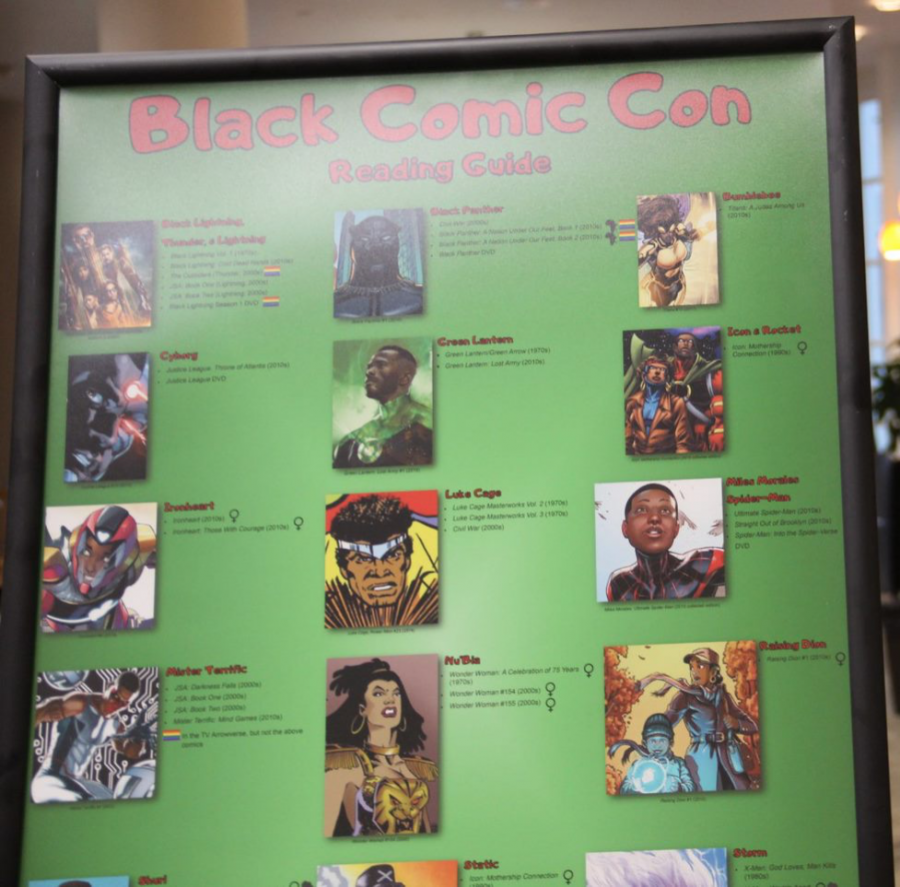 The Africana Majors Student Committee held the first ever comic con at Dickinson College, kicking off a series of events in celebration of Black History Month.

While the event eschewed cosplay and other familiar aspects of comic cons, it featured displays about black superheroes that connected the theoretical aspects of Africana studies with the characters on display. The student-created display included information about the history of some of the characters and an explanation of how their story was an example of the theory, as well as posters explaining major Africana studies theories and a reading guide with biographical details about the characters.

The main event was a video call with Anedra Edwards ’10, who is currently a visual effects editor with The CW network on the TV show “Black Lightning.” Edwards provided and effects reel from season two of show for the group, which showed a mixture of raw footage and final product to show how she developed the visual effects.

Sakinah Hobbes ’20, who was key in organizing the event, introduced Edwards. Hobbes said that she was excited to “honor her, give her space as a black woman,” especially during an event held in Black History Month.

When Isoke Senghor ’20 asked about Edwards motivation to work on Black Lightning, she said that she enjoys making “content where I can see myself, truly see myself, my family, and my friends.” Senghor herself called the show “Binge-worthy.”

Edwards also said she appreciates that the superhero Black Lightning is from the community that he protects. It sends the message that “we can save ourselves – we don’t need a savior from outside us,” she said.

Edwards spoke at length about her career path. She graduated from Dickinson College majoring in International Business and Management with a minor in Film Studies. Before working on Black Lightning, she worked on “Naked and Afraid,” “Bad Girls Club,” and “Million Dollar Listing.”

Edwards also said that “there are still hurdles, still challenges” to being black in the entertainment industry. “There are times where I’m just one in the room,” she said. But she also lauded the diversity of the production team for Black Lightning and said that “Atlanta [where the show is filmed] lends itself to that.”

Taeya Viruet ’20 was involved with the comic con as a writer for the displays. Despite not being interested in comics, “being able to look up the characters themselves and write about the plots was great,” she said.

Senghor, who worked on the project, said that it was “really fun finding the space between academics and comics”

Information Literacy Librarian Ian Boucher, who assisted with the research for the exhibit, said that “it was amazing to support the students who organized this. I’m looking forward to everything the students are able to get out of this.”

The Africana Studies Comic-Con Exhibit Opening took place on Friday, Feb. 7 in the Stafford Reading Area of the Waidner-Spahr Library at 4:30 p.m.