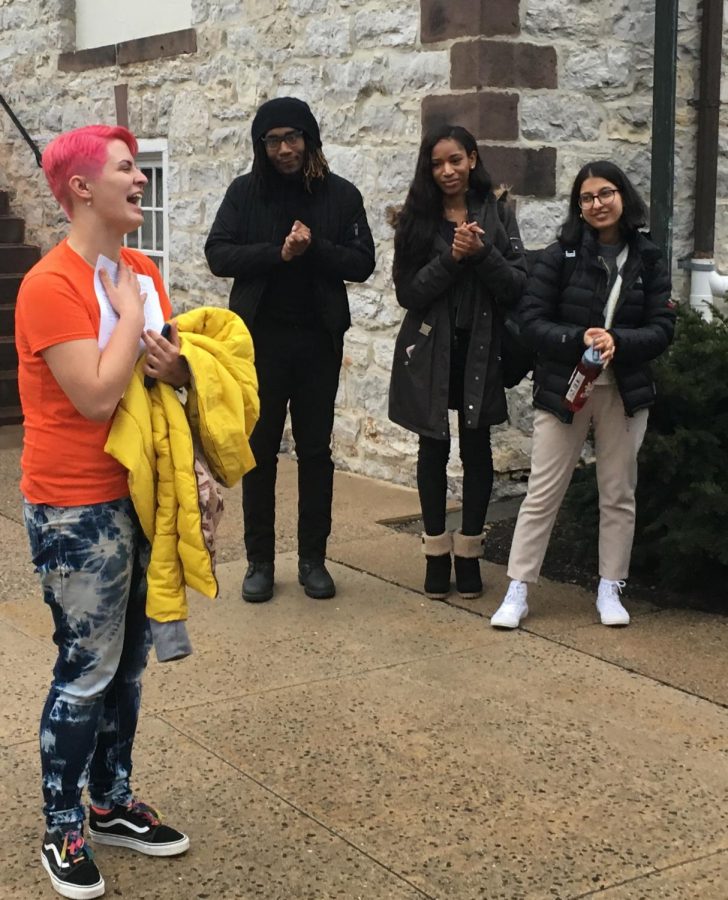 Protests continued into a fourth day, Thursday, Feb. 6, when group leader Rose McAvoy ’20 along with Kenyana Savage ’21, Sagun Sharma ’21 and Kaliph Brown ’20 met with administration to negotiate the final demands. Nine of the 17 demands had been met as of print time for The Dickinsonian article published on Feb. 6.

Brown said he joined the Title IX reform negotiations to provide marginalized and underrepresented groups on campus opportunities to craft the new policies. “I also wanted to provide my own perspective in the negotiation room, given my experience working for different offices and factions of the college,” he said.

The final negotiations took place in Old West at 4 p.m. News quickly spread from the student group to the rest of campus. Around 50 people, including students and faculty, met at the front steps of Old West for support of the signing of new policies.

Most students in attendance participated in the protests. Amber Holmes ’23 sat in the HUB for all four days of the protest. She reflected on the end of the protests with the signing of new Title IX policies. “It’s just a really powerful moment to see all of our hard work come to fruition, especially so quickly…” she said.

Students commented on the administration’s response to Title IX reform. Stephanie Levin ’22 questioned the intentions of the quick signing of new policies. “I don’t know if it means they’re listening, or they’re giving up because they’re afraid of us or they want to look good,” she said. Zoë Jacks ’23 expressed relief for the administration listening to students. “It might take a little bit of effort, but when the student body as a whole wants something the administration will listen,” she said. Henry Cohen ’20 explained the importance of accountability on the administration. “I hope that these things are actually put into place at a reasonable time frame,” he said.

Maya Cromwell ’20 said that she was happy with the signing of new policies but that “[…] we [the students] need to ensure that the practice is actually going to be upheld.”

“There’s definitely still work to be done,” Brown said and explained that students need to hold the administration accountable to enforce these policies.

Other students reflected on the movement and its impact on campus change. Marec Marhoul ’23 said the movement was inspiring because “It’s very heartening to see this many people care about these issues and are willing to protest.” Lilly Eidelberg ’23 agreed with Marhoul’s sentiments. “It felt really good to have a huge group of people care about one thing,” she said.

Faculty in attendance expressed their support for the student-led movement. Grace Larson, assistant professor of psychology, said “I’m extremely proud and moved to see how committed students have been fighting for change.” Miranda Bobrowski, instructor of psychology, said that she was proud of the students’ initiative to make the campus community feel safer.

The signing of new policies marked the end of McAvoy’s fight to reform Title IX. “It just means that no one is going to have to go through the same process I went through,” she said.

Ensign sent an email to the Dickinson College community that same evening to summarize the new policies. “I want to thank the students for their activism, and I want to apologize to Rose for what she has had to endure,” she stated in the email.

The college has also made the following statement: “The provost is pursuing Rose’s report of an insensitive remark by a faculty member regarding her sexual assault. We have located Rose’s email with the report, confirming that it was sent while her case was under investigation.”

McAvoy reflected on the implementation of the new policies. She said, “[T]here’s dates where everything has to be put into place, and I’m going to call them [the administration] on each of these dates. I have them in my phone already.”