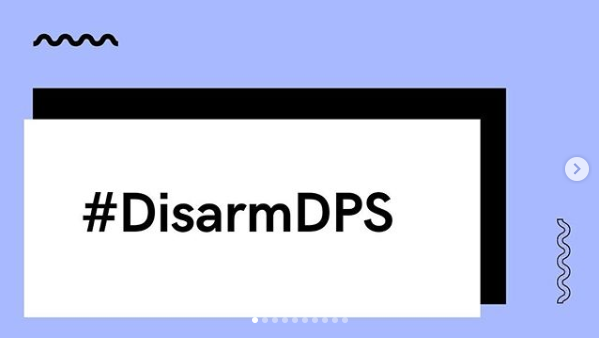 As protests continue throughout the country against police brutality, Dickinson students have come together for their own cause: the disarmament of the college’s Department of Public Safety (DPS).

In a Change.org petition, the Black Student Union (BSU) addresses Dickinson College students and alumni to support demands for the disarmament of DPS officers, along with other demands for changes to campus policies related to policing and creating a safer environment for students of color. “Police brutality as well as other forms of oppressive violence exist in all parts of the world, and the Dickinson community is directly impacted by it,” according to the petition. Since its June 1 release, the petition has received over 2,200 signatures from Dickinson students and alumni, along with people outside of the Dickinson community.

Keshawn Bostic ’21, President of the BSU, led the initiative to create the petition and was inspired by current nationwide protests against police brutality and systemic racism. “We can take this national movement and use it to benefit our situation in this little school in Pennsylvania,” Bostic said.

Nationwide protests erupted after the death of George Floyd, a 46-year-old black man suffocated to death by Derek Chauvin, a Minneapolis police officer. Protests and efforts led by Black Lives Matter (BLM) called to defund the police and instead reinvest funds into local-public safety forces.

On Sunday, May 31, President Margee Ensign released a statement to the Dickinson community regarding the death of Floyd and subsequent protests. “We categorically condemn police brutality; we categorically condemn all forms of racism. We are an institution founded to educate citizen leaders, and we desperately need those leaders now more than ever,” Ensign said on behalf of the college. Ensign’s statement followed comments from students on the college’s Instagram account to address the situation.

The BSU’s petition, titled “#DisarmDPS” features four demands: the disarmament of DPS officers, the de-deputization of DPS officers, the retraction of the college’s anti-boycott policy, and the creation of a public safety board with DPS officers, students, and officers from the Carlisle Police Department (CPD). Bostic explained the reasoning for the title demand of the petition and said, “It’s taking that kind of power away from DPS that they don’t really need… I understand…the possibility that things will happen, and we will need police-like intervention. But at the end of the day, most of the time there won’t be.” Chief of Public Safety Dee Danser could not be reached for comment by time of publication.

Ensign released a statement to the Dickinson community on Monday, 6/15 that Vice President of Student Life and Dean of Students George Stroud would work with a group of students, staff and faculty to “…discuss recent requests for change from the Black Student Union and other student groups.” The email followed a recent incident where someone spray-painted “slave owner” on the statue of Dr. Benjamin Rush.

In terms of petition numbers, the BSU set a goal of 2,500 signatures with hopes that it will apply pressure on the college administration. “We are just getting started. We have allies on our side that can really make a difference…” Bostic said.

The petition also gained support from various student groups on campus. The Women of Color Summit is listed on the petition to support the BSU’s demands. In a statement to The Dickinsonian, the Women of Color Summit said, “We need to stand up for our community and show continuous solidarity…We have always and will continue to push for racial justice and equality and the progress will not stop here.”

“I hope people are watching what’s happening right now,” Bostic said, “The world is changing in a lot of different ways. It’s not going to change unless people help.”

To learn more about the petition, visit https://www.change.org/p/students-and-alumni-of-dickinson-college-disarmdps