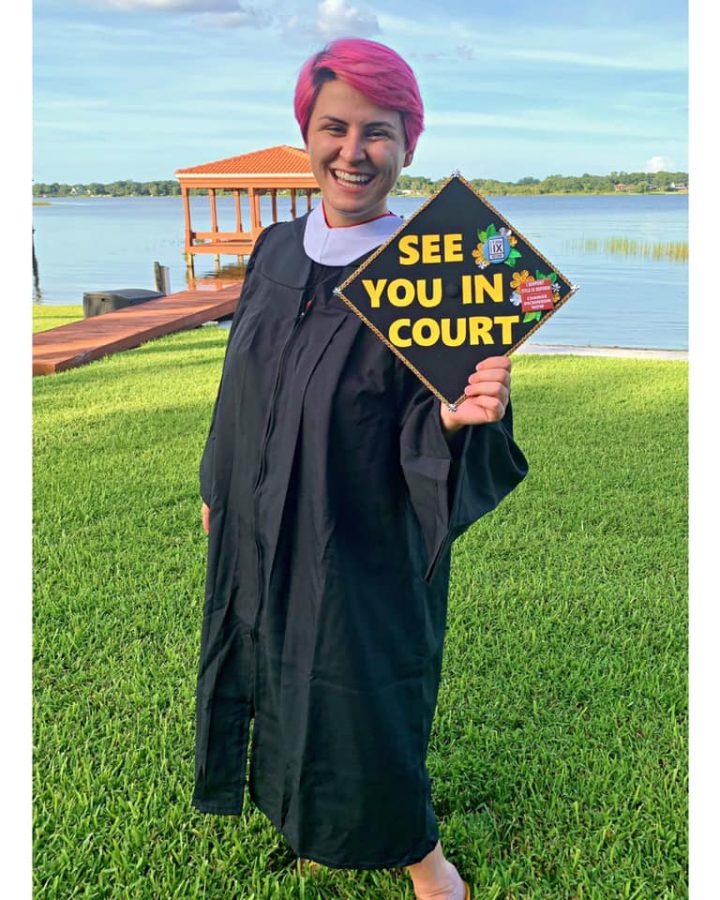 Rose McAvoy '20 poses with her graduation cap which has the phrase "See You In Court" on it, referencing the lawsuit.

Rose McAvoy ‘20, a Dickinson graduate whose prolonged sexual assault investigation sparked on-campus protests calling for Title IX reform in February, has filed a lawsuit against the college, claiming the school has continued to fail to investigate her assault in a transparent and time-efficient manner.

McAvoy’s January 30 opinion piece in The Dickinsonian titled “I’m Done Waiting for Dickinson to Take Sexual Assault Seriously” led to a four day of sit-in calling for reforms to Dickinson’s Title IX process by students in the Holland Union Building (HUB). The protest eventually ended with the college agreeing to 15 of the 17 demands.

However, since the agreement was reached, McAvoy has continued to encounter issues communicating with the college and accessing her case’s investigative materials, among other aspects.

“So they agreed to give everyone all of their investigative materials from their case which was a really big deal because that’s really helpful for doing appeals,” said McAvoy. “So we finally got them to agree to give that, and then everyone who was requesting it was having troubles…like I personally got back my investigative materials and like, half of it is completely redacted–like it’s just 20 black pages, and things like that.”

In an email to The Dickinsonian on August 4, Title IX Coordinator Kat Matic stated the following regarding the Title IX office’s policies and procedures for relearning investigative materials: “Each person interviewed including, for example, witnesses have confidentiality rights the college must uphold.  This means that we have to redact personally identifiable information and information that parties have not signed a release for.  Students who request copies of their record are provided information that they provided during their interviews and the investigation process.” Matic furthered that “[t]here may also be information that is confidential and sensitive that a party may not allow us to release, for example, this may include medical records or counseling records.”

McAvoy also claims that she witnessed a flawed system for organizing interview recordings that were done during her investigation. “They like don’t have any system for retaining the interview transcripts or recordings, nothing. So like it’s literally, a professor or faculty member that’s like trained to do these interviews, and then they record it, and just do whatever they want with that, essentially. Like, they literally can record you on their phone. And then, they could keep it or delete it. They can do whatever they want. They never turn it over to the Title IX office,” said McAvoy. “So literally when people were requesting their transcripts and things like that, they were just calling up these people essentially and saying ‘Hey do you happen to have this?’ Like that’s literally what they were doing because they have no system for doing it. Half of them they don’t even have, so they can’t even honor the agreement by giving people what they agreed to give people.”

Christine Baksi, college spokesperson, shared an official statement with The Dickinsonian via email on August 5, emphasizing the effort administrators and staff put into Title IX cases. “Dickinson takes sexual assault cases very seriously. We do more than follow the law on Title IX, we work diligently with those involved to reach a fair and equitable resolution of these cases. While we cannot comment further on pending litigation, we can share that we were surprised and disappointed to learn of this lawsuit because we worked with Rose to come to an agreement that instituted the majority of the changes she requested. Rose and other students joined the administration in signing that agreement in February, and we have lived up to the letter and the spirit of that agreement since then.”

McAvoy also explained that it was Dickinson’s lack of communication with her that contributed to her decision to sue the college. “At first, about a month ago we reached out to them and tried to talk about it, and figure it out, and they just stonewalled us. They just did not respond. And, like we had lawyers involved when we were trying to talk to them and they were just completely not even talking to us, I think they were waiting out the statute of limitations, honestly. Because they didn’t respond to us until the day before the statute of limitations ended. I think they’re aware of that.”

In an August 5 email to The Dickinsonian, Kendall Isaac, Dickinson’s chief legal officer, explained that the college has complied with all of the promises made during the agreement. Isaac also explained that there are additional provisions the college has already completed even though they were not due until July 1, 2021. These provisions include the college’s policy to reflect that college employees in authority positions, including student workers, who violate the college’s sexual harassment and misconduct policy will be subjected to disciplinary proceedings and the college will consider relocating them to a new position if there’s potential for conflict. The college has also hired a full-time investigator to accelerate case processes.

Isaac continues to stand by the efforts the college has made thus far. “[W]e have been very diligent in complying with what we agreed to do, and therefore we are disappointed that despite the fact that we have been 100% compliant with the negotiated agreement Rose has accused us of not being compliant. While we will vigorously defend Dickinson against this lawsuit, we will also continue to operate in good faith to complete the remaining items in the negotiated agreement in order to stay true to what we promised to our students.”

McAvoy also explained that her conversations with administration during the negotiations for the college’s Title IX reform in February contributed to her concerns. “There was literally like the first day when I went in there, and we were talking through each of the demands, and I remember Margee, when we got to one of them, which was that if you were found guilty of rape, there was just an automatic expulsion I believe, and then she literally she laughed and she was like, ‘You know I thought this was already our policy, so you can have that.’ And I was like that’s appalling like that’s very scary, that’s part of the problem.”

McAvoy explained that her end goals for her lawsuit mainly pertain to policy change and getting justice for others with Title IX cases. “There’s ultimately an aspect to it which is sort of getting justice for my case, which like I think the purpose for me in doing that is kind of like, for everybody who’s ever had an awful experience with Dickinson’s Title IX,” adding that “not everybody is in a position where they could fight it to the end where it actually impacts the college and they don’t do that thing again, and so that’s why I want to do it.”