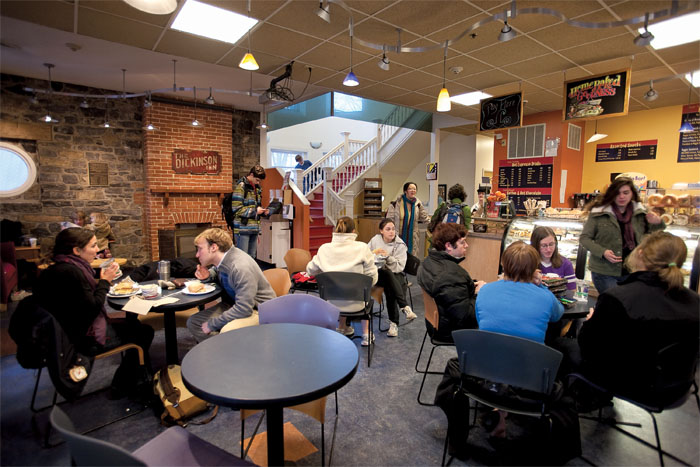 The Quarry, formerly a dining establishment on campus, has been renovated to a student social space with the input of students.

According to the college website, the building where the Quarry finds home has had an extensive history. Originally a house for the former Phi Delta Theta fraternity, the building was bought out by the college and renovated into classrooms and labs for the psychology department thirty years after it was first built, in 1931. In 1958, the music department took control of the building and in 1982, it once again housed a fraternity, this time the former Kappa Sigma. It was not until 2000 that the building became the Quarry and a part of Dining Services.

Bronte Burleigh-Jones, vice president of Finance and Administration, said the Quarry was renovated because, “The college has been trying to improve student social space on campus for quite some time. The Quarry was identified as a possible option for new and improved student social space on campus as part of a study conducted by [Student Leadership and Campus Engagement]in 2019.”

Burleigh-Jones said that in January of 2020 a budget of $100,000 was “established to activate the plan,” and a design for the Quarry was “advanced and eventually approved by the college’s Space Planning Committee in May of 2020.” The renovations started in the summer of 2020 and are now complete, except for the “inclusion of a few pieces of audio equipment which are on backorder.”

Burleigh-Jones also added that the Quarry’s location was prime for why it was renovated. “The Quarry’s layout and central campus location made it a great candidate for the project. Another reason involves independent and simultaneous assessment made by Dining Services and the broader Finance and Administration Division regarding the efficacy for the Quarry as a dining venue on campus.” She also said that student input was included in this decision.

The current concept for the new student space in the Quarry is to “serve as a casual student hangout/meeting area by day and a student event/party space at night (Thursday to Saturday),” Burleigh-Jones said. “If food is desired for events, it will need to be catered. There is also an opportunity for a student-run coffee cart setup on the first floor of the Quarry.”

The main renovations took place on the first floor, where the dining counters were opened up to “accommodate as many students are possible.” These renovations include “new flooring, new ceilings, fresh paint and new furniture. The furniture is tables and chairs which were designed for ease of movement and storage.” The lower level as well as the second floor had “new paint, lighting upgrades, and minor bathroom upgrades,” as well as a new sound system.

The Quarry was previously the only on-campus option for students looking for a late-night snack. Burleigh-Jones said that once COVID protocols are lifted, “Union Station will operate under the same hours as (the) Quarry had previously to ensure service for late-night hours. The late night menu will be different so students experience variety between day parts and so options match differing needs at different times.”

During a Nov. 19 Open Forum information session for juniors and seniors, administration revealed that the Quarry would also be used as instruction space during the school day.

Stephanie Klein ‘21 said she will miss late nights at the Quarry. “I’m gonna miss the late night pretzels and coffee with my friends. It was a great place to get a bite at night, especially during midterms.”

The employees that were once employed at the Quarry will be “assigned to other retail locations and provide late-night service in Union Station or work in the Biblio or Underground.”

Dion DeGarmo ‘22 said that the renovation was a good idea. “It’s such an enclosed space already, but if they managed to get an outside pickup system that would be good for those on campus.”