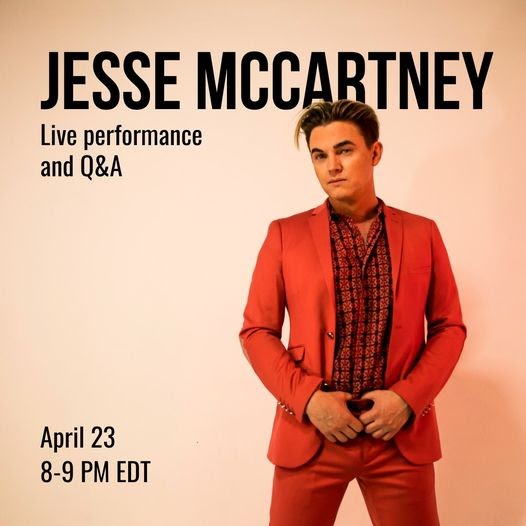 Jesse McCartney performed two songs and responded to several pre-submitted questions in front of a virtual audience of Dickinsonians on Friday, April 23.

The event was planned by MOB Special Events Co-Chairs Alexandra Colby ’22 and Gavin Wood ’21, who also hosted it and asked McCartney questions submitted by students.

Colby told The Dickinsonian that while developing a list of potential guests, Wood brought up Jesse McCartney. “We heard he is a great performer and loves performing at colleges,” she said.

The preparation for the event involved contacting a booking agency who then spoke to McCartney’s agent. “After that our advisor [Jessee Vasold] was able to put together a contract for the event.”

Max Abramson ’24 enjoyed the concert and added that “Seeing him perform and answer questions just sitting in his kitchen really just made him seem like a talented but down-to-earth dude.”

Colby candidly admitted that planning the event in a virtual format did not require much effort on their part. The organizers created an event on EngageD where students could RSVP and submit one question they would like to ask McCartney. They then compiled a list of the most frequently asked questions and “sent them to Jesse’s manager so she could review them.”

When asked about what students could expect to see at the concert, Colby emphasized that she hoped students would enjoy listening to the songs and the Q&A session. “It’s not every day that you get to ask celebrities questions!”

“The Q&A session was a really cool way to see a public figure in a more relaxed way,” said Ariel Levin-Antila ’21. “That made it more personal.”

Chakra Sokhomsan ’24 echoed these sentiments, “To see Jesse McCartney on my computer screen singing for Dickinson […] it honestly felt so surreal.”