Dickinson Community Reacts to the Departure of President Margee Ensign 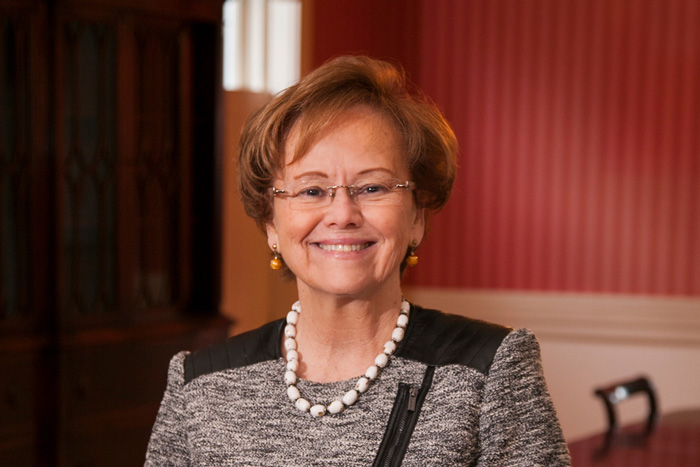 Margee Ensign, The President of Dickinson College, has resigned.

The college’s Board of Trustees has accepted the resignation of Margee Ensign, who has served Dickinson for four years. On Friday, May 4 Ensign announced via an email to the Dickinson community that she will “once again take up the presidency of the American University of Nigeria (AUN).”

In connection with this, the institution has announced that John E. Jones III ’77, P’11 will be the college’s interim president for 2 years. He has served as a trustee since 2008, and as board chair for the past four years. He was appointed by George W. Bush in 2002 to the U.S. District Court for the Middle District of Pennsylvania, and will retire as Chief Judge this summer. Judge Jones along with his wife, Beth, will move into the president’s home on Conway Street in August.

In a letter to campus, President Ensign wrote, “This decision was the most difficult of my career. When I was asked to return to AUN, I felt called to continue the education and peace work we had started through the university. The institution has been without a president for six months, and conditions for education in the area are deteriorating. I must return to try to make a difference, to work for the common good.”

Before joining Dickinson, Ensign had served for seven years as president of AUN. During her years there, she took several important initiatives in education and peace, including overseeing the sustainable construction of the university. There, she also initiated the establishment of a digital library which would make books and educational materials accessible to more people.

During the Boko Haram insurgency in the Northeastern states of Nigeria, Ensign co-founded and led the Adamawa Peace Initiative (API), a Yola-based response to the escalating violence. The initiative helped feed 300,000 refugees fleeing the fighting to the north, and promoted peace in the area through education, empowerment and community development.

Students have expressed mixed feelings about President Ensign’s departure. “I will miss President Ensign because of her passion for the students at this institution”, said Jake DeCarli ’22. “I am so sad that she is leaving, but I’m excited for this new adventure ahead of her”, said Angelo Tarzona ’21.

Patience Bulus ’24, who knew Ensign personally, shared her feelings about the news –  “I am happy as well as sad that she is leaving. For me, Ensign was not just a president, she was like a mother to me. I’ve known her since 2018 and were really close. I’m going to miss her. But missing her isn’t a bad thing especially since she is returning to AUN for a noble cause. The University was crumbling in her absence and several of her initiatives there are needing good leadership. I’m glad she will be continuing to support and empower women and war victims that give them a second chance at life. So, I’m more happy than sad that she’s going there. ”