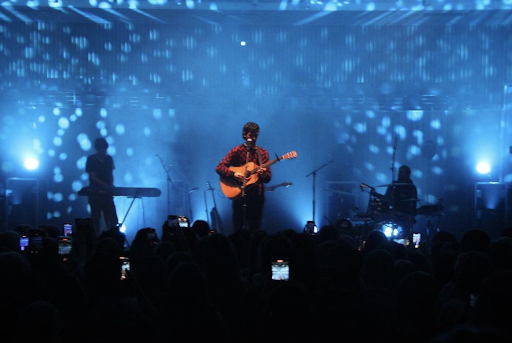 Jeremy Zucker, a New Jersey-born pop artist, performed live at MOB’s annual fall concert on Nov 20, the first concert to be held in-person since the start of the COVID-19 pandemic. Known for his creative mix of low-production poignant lyrics, Zucker treated Dickinson students to a selection of his popular songs, including his 2018 hit “comethru” which has amassed more than 500 million streams on Spotify.

Angela Abinales ’25 spoke with The Dickinsonian about how she thinks Zucker is “a super underrated artist.” She stated how she has been listening to his music since 2017, and says, “[his music] has gotten me through so much.” According to Abinales, the concert lived up to her expectations, and she was even able to meet Zucker after the performance. “I can’t believe I met him!” she told The Dickinsonian.

MOB held last year’s concert virtually due to the COVID-19 pandemic, and while it helped bring a sense of normalcy back to campus, this concert was different. Zucker engaged with the crowd in a way that would have been impossible in a virtual setting. He spoke with the audience throughout the performance, asking about their weekend plans, laughed at a student who yelled, “are you single?” and found himself faced with a handful of miniature plastic babies on the stage. He took this in stride and threw them out into the crowd, shouting “little plastic man for you…and you!”

The concert, which was held in the Anita Tuvin Schaver Auditorium (ATS), was attended by around 250-300 students, most of whom crowded to the front of the floor near the stage. This group did not cover the full extent of the ATS floor, and though additional students stayed in their chairs, it was not close to a sellout.

The turnout can be attributed to the ongoing adjustment to in-person events, fears of spreading or catching COVID-19, and the artist’s lack of name recognition. Zucker, though he has a significant fan base, lacks the star power of someone like Steve Aoki, the Grammy-nominated DJ who played the MOB Fall Concert in 2016. Though students like Maddie Brown ’25 were “super pumped” that Zucker was playing, others were less impressed. Dean Gundermann ’25 said “I know a few of his songs. I don’t even know what he looks like.”

August Company, a rock band made up of Dickinson students, opened for Zucker, playing their signature upbeat style of music. They played “Slump Marie,” their latest release, along with songs off of “Solipsis,” their debut album released earlier this year.