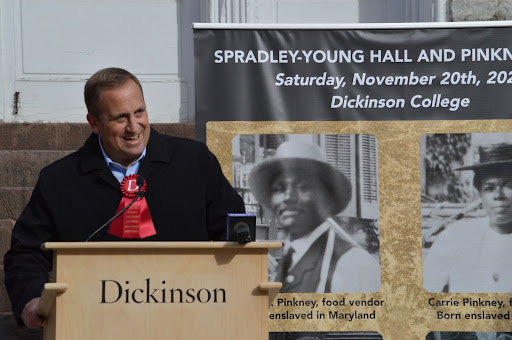 In the first steps of the House Divided Project’s “Dickinson & Slavery Exhibit”, two locations on campus were renamed in honor of four figures from Dickinson’s history who were formerly enslaved. These include Spradley-Young Hall (previously known as Cooper Hall) and Pinkney Gate (previously known as East College Gate). With the long history that Dickinson College has had in regards to American slavery and African-American rights, this is a momentous occasion for the college community, in that there is now the beginnings of recognition for these people who helped shaped this school into what it is today. In May 2020, then-President Margee Ensign announced that the school’s board of trustees unanimously voted to rename these locations. Now, after this ceremony on Nov 20, 2021, the change has become official.

The House Divided Project, directed by Matt Pinsker, a Professor of History at the College, works to create resources to help teach the era of American history leading up to the Civil War, the war itself, and its aftermath during Reconstruction, as well as working on this history in relation to Dickinson College. The Dickinson and Slavery Exhibit was started in 2018-19 to further examine the school’s reach in regard to its impact in American slavery. One of the most consequential pieces of Dickinson’s history relating to slavery is the Dred Scott Case. One of the most infamous cases in the Supreme Court’s history, it ruled that African-Americans were not people, but rather property, and can not go to court. Dickinson’s surprisingly large impact comes in the fact that Chief Justice Roger Taney (Class of 1796) and Justice Robert Grier (Class of 1812) both ruled with the 7-2 majority. Also, then-newly elected 15th President of the United States, James Buchanan, was an alum of the Class of 1809 and despite being a northerner, was very sympathetic to slavery. He did little after states began to secede due to the election of his successor, Abraham Lincoln, despite the fact that he knew it was unconstitutional. While these are among the biggest impacts Dickinson College has had on the history of slavery, its history is also prevelent on a local level as well.

The ceremony itself took place outside Old West on Saturday morning. The ceremony came with statements by Professor Pinsker, along with biographies of each person being honored read by interns of the House Divided Project. These interns included Charlotte Goodman ‘23, Caroline Eagleton ‘23, Amanda Sowah ‘22, and Jordyn Ney ‘23. The event then closed with a speech by Interim President John E. Jones ‘77, and Professor Pinsker playing audio of Charlotte Young McStalworth, the granddaughter of Spradley-Young namesake Robert Young, who reminisced about her grandfather with some of her family members. Also in attendance were Carlisle Mayor Tim Scott, and roughly 50 descendants of the individuals being honored, who came from across the country, and ranged from two years old to being great-grandparents. After the day’s main event, the House Divided Project opened its doors to allow visitors to view its Dickinson and Slavery museum exhibit and experience the Project’s walking tour. Finally, the day culminated in a lecture by military historian Eric Wittenberg, Class of ‘83, where he discussed myths regarding the Battle of Gettysburg in the presence of the lectern that was on speakers platform when President Abraham Lincoln gave his legendary Gettysburg Address speech.

After the renaming ceremony finished, Jordyn Ney ‘23 sat down with the Dickinsonian to discuss the day’s events and the work that the House Divided Project has done so far and what it plans to do. Along with the renaming ceremony and the research that goes into the House Divided Project, they have also worked with the Teagle Foundation to host the Knowledge for Freedom Seminar this past summer, an event where low-income high school students could receive credits before applying to college by studying the impacts of slavery in American history. After getting involved with the project, Ney began to realize that this was far more than an internship, in that she wanted to be part of the process to remember individuals such as those being remembered at the renaming ceremony. She also began to realize the impact this would have in the local community as well. This also ties in well with the project’s future plans, in that this is, as Ney says, “just a first step,” in their work to provide a more diverse view of Dickinson. Possible future plans include other renamings, which could include black graduates and black women from Dickinson’s history. However, the most concrete future plans for the House Divided Project at the moment include “a lot more research and… many more conversations” as Ney described it.

With the two locations on campus being renamed, they bring about new names for Dickinson students to learn about that they may not have otherwise known. Henry Spradley and Robert Young, the new namesakes of the former Cooper Hall, were popular janitors on Dickinson’s campus. Spradley was so well known that the school closed the day of his service, and his funeral service was held in Bosler Hall, as his church would not be able to handle the estimated turnout for those who would want to pay respects. Meanwhile, Young, one of Dickinson College’s longest serving employees, was also very well beloved and eventually became the head of campus security. He also broke a major milestone for Dickinson, in that he fought to get his son admitted to the school, an event that made national headlines and ultimately led to Dickinson admitting its first African-American student and integrating earlier than many other schools in America. These two impactful figures of Dickinson history are the new namesakes of the dorm once known as Cooper Hall, named for a professor at Dickinson who went on to become the president of South Carolina College and became a large advocate of states’ right to slavery, including being a slave owner himself. Secondly, the newly named Pinkney Gate was renamed after Noah and Carrie Pinkney, who were popular snack vendors and restaurant owners in Carlisle and the college campus for several decades. In the 1950s, the gate that is now named Pinkney Gate had a plaque installed honoring Noah, making him the first African-American recognized with a dedication on campus, albeit without mention of his wife Carrie. There are plans to replace this plaque to honor both Noah and Carrie. Along with these great accomplishments for the Dickinson community, it is also important to recognize the prejudice these people faced during their lifetime by some community members, such as being made fun of or harassed for their race, some of their family being wrongfully accused of crimes, and factors that came from their enslavement such as being unable to read.