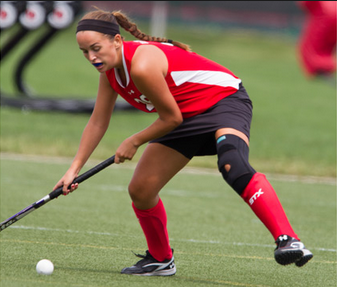 Alyssa Stillwell ’16 has scored the first goal in each of the Red Devils’ last three wins. Dickinson is averaging 3 goals per game after averaging 2.4 last year.

The Red Devils had a banner week, going 3-0 with two wins on the road and one at home. On Wednesday, Sept. 18, The Devils travelled to Neumann University where they had a dominating 9-3 win. Dickinson also had their first home Centennial Conference game when they battled Swarthmore on Saturday, Sept. 21 where they earned a close 2-1 win to become 2-0 in the conference for the first time since 1997. For the third win, Dickinson travelled to Shenandoah University on Tuesday, Sept. 24 and dominated en route to a 3-0 win.

At Neumann, the Red Devils struck early, scoring just 2:54 into the first half. The goal came from forward Alyssa Stillwell ’16 on an assist from Ali Becker ’15. Becker would proceed to follow up with a goal of her own just three minutes later. The Devils kept the pressure on, netting their third goal in the eighth minute of the game on a penalty corner. Kendal Packo ’17 netted the goal on an assist from Merritt Davis ’17. Two more First-years supported the offensive effort with a goal from Erica Marshall ’17 coming off an assist from Kirsten Walsh ‘17 with 22 minutes remaining in the first half to stretch the lead to 4-0. Neumann capitalized on a penalty corner at the end of the half to cut the deficit to 4-1 and again at the beginning of the second half to make it 4-2.

In a span of just one minute and seventeen seconds, DCFH responded with a pair of goals. Catherine Perlmutter ’17 scored four minutes into the second half and assisted Marshall on her second goal to increase the lead to 7-2. Marshall added an assist to her impressive game, feeding Maddie Groves ’17 with 23:54 remaining in the second half. Julia Applegate ’14 tacked on an unassisted goal, her third of the season, to bring the final tally to 9 goals for the devils. Katy Schlechtweg ’14 and Emily Fuss ’16 split time in the goal. Schlechtweg made one save as the defense held Neumann to just five shots. Dickinson fired off 35 shots and led in penalty corners 12-6.

In their first home conference game, the Red Devils improved to 2-0 in conference play in a hard fought battle against a strong Swarthmore team. Stillwell struck early again, netting one just 1:35 into the contest as she redirected a shot from Becker to give the Red Devils a 1-0 lead. Dickinson increased their lead to two as Marshall connected off of a beautiful assist from Groves. Marshall, who has contributed greatly in her first season with three goals, said that “the game was definitely a great win for us; we were able to score in the first five minutes which helped so much throughout the whole game because we carried that same intensity from start to finish.” Swarthmore would go on to score in the second half; assisted by a scramble in front of the net. Schlechtweg turned in another solid performance; finishing with four saves. Caroline Karwel ’16 made a huge play in another battle in front of the cage to register a defensive save.

The Red Devils outshot the visiting Garnet 32-10 and dominated in corners as well, forcing 14 while only allowing 5 on the defensive side. The wins have motivated the Red Devils for their upcoming games; “In practice, we’re going to work on what we did wrong to make sure we continue to improve” said Marshall. “We are determined to make it to the championship this year and this win was only one step on our road to getting there.”

Against Shenandoah, Dickinson tok all 16 of the shots in the first half and finished with a 24-5 shot advantage.They also dominated in penalty corners, recording a 15-1 advantage. A majority of the game was spent in Shenandoah territory as Dickinson did a good job of keeping the pressure on and keeping the ball away from their net. Schlechtweg only needed to make three saves en route to another shutout, her second of the season.

In the twenty-second minute, Alyssa Stillwell scored again to give the Red Devils a 1-0 lead. Remarkably, Stillwell has scored the first goal in each of the Red Devils’ last three wins. In the thirtieth minute, Merritt Davis ’17 scored to give Dickinson a 2-0 lead. Late in the second half, Caroline Karwel tacked in the Red Devils’ third goal to put the game away.

DCFH will take on Muhlenberg College at home on Saturday, Sept. 28 for the homecoming game at 11:00 a.m. The Muhlenberg Mules finished 4-6 in the Centennial Conference last season.