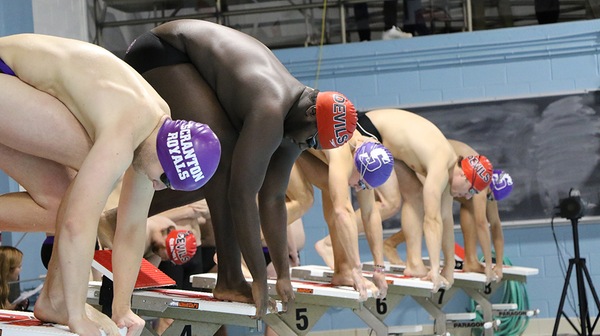 The Dickinson College Men’s Swim Team had an exciting 167-94 victory over the University of Scranton Royals at home this past Saturday, Nov. 10.

The men came off the blocks in the first event motivated and ready to win.  In the first event, the 200-medley relay, the team pulled off a win by .39 seconds. The team made up of Graham Novitch ’20, Will Freeman ’20, Kiernan Jordan ’19 and Ben Shoul ’22 had strong starts and quick finishes to get into the wall before the Royals could do so, starting the men off in the leading direction. The team knew it was going to be a close meet, but it did not change the drive from the team or the outcome, Liam Pauli ’21 said, “Going into a close meet I wasn’t sure how we were going to do, but we surpassed our expectations and had so many great swims.” The Red Devils did have a great day from start to finish.

The Red Devils held the lead for the rest of the meet. There were many event victories throughout the day and increased the excitement from the team and the sidelines. There was a large fan section that contained many of the alumni cheering on their team in the water, adding even more excitement to the meet and every swim. Throughout the entirety of the meet, one could see huge team spirit and encouragement from everyone that was on the benches waiting to swim. In speaking with Damon St. Prix ’22, he said, “I think it was a great team performance. We put our hearts into each race after a week of a lot of injuries and sickness.” St. Prix placed first in his 200 freestyle as well as the 100. He also swam the lead leg of the 400-yard freestyle relay which also placed first. Alongside him in the 400-medley relay was Tyler Catania ’21, Jordan and Logan Cort ’22. The medley relay team finished in first by 2 seconds and brought in the last win of the day. As  meet came to an end James Cummings ’20 said, “There was a lot of great swims in the meet on Saturday and everyone gave it their all to show Scranton what Dickinson swim is in and out of the pool.” In looking at the many great swims from the men, there were multiple individuals who went best times of the season. Among these swimmers was Bjorn Prandtner ’21 who beat his own individual time in the 50 freestyle that he had gone just the previous weekend proving he is just one example of the team embodying hard work throughout the week.

With the teamwork and comradery the day brought, we wish the men luck as they hope to carry this success on throughout the rest of their  season with each passing meet. With an incredibly strong three coach staff, taking on a new assistant coach this year, the men have been training hard in and out of the pool and are proving to be a presence in the Centennial Conference. The team has taken on a very large amount of first-year talent and is thankful to continue to add depth to the already strong team that is forming at the Kline Center. This upcoming Saturday, Nov. 17 the men will travel to Bloomsburg for a nonconference meet and hopefully further advance their 3-1 overall record.