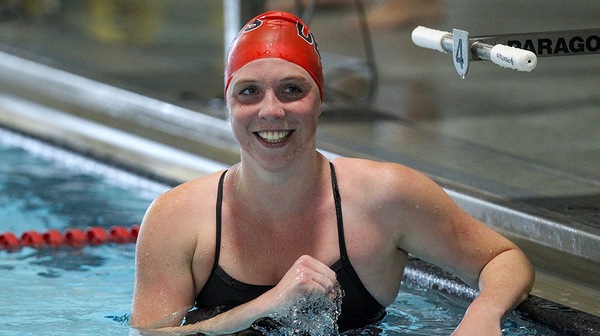 After a long season, Centennial Conference Championships have finally came and went for the men and women’s swim teams this past Thursday. Feb. 21-Sunday, Feb. 24 at Gettysburg College. There was a total of seven sessions over the course of four days for the teams to compete in. It required a great deal of strength, determination and focus and the Red Devils proved they had all of it. Both the men and women’s teams placed fifth in the overall standings. Each day of competition had its own set of successes. On the women’s side there were a number of outstanding swims. On the first night of competition, the 200-medley relay consisting of Katie Schmidt ’19, Hannah Griffith ’21, Molly Sternick ’20 and Sammy Boswell ’19 set a new school record. On the men’s side the 800-freestyle relay consisting of Logan Cort ’22, Damon St. Prix ’22, Will Freeman ’20 and Benjamin Shapiro ’19 also broke the school record. The excitement from the night carried the teams into the next day.

The next day of competition had many highlights. To begin, Olivia Lyman ’19, won the 500-freestyle securing her fourth straight conference victory. There were many other individuals who had top 10 finishes. On the women’s side Maddi Vlattas ’22 placed ninth in the 200-individual medley and Boswell came in eighth in the 50-freestyle. For the men, Freeman came in fourth in the 200 Individual Medley along with Shapiro who made it into the top 10.

On the third day there was a renewed sense of determination within the team. In the morning session two school records were broken. Griffith broke the 100-breaststroke and Schmidt broke the 100-backstroke coming in 2nd overall as well. Another record was broken by the women in the 200-freestyle relay by Boswell, Sternick, Lauren Woznicki ’20 and Brooke Kelly ’22. Vlattas broke the 100-breatstroke record again at finals. The men had records broken as well with St. Prix breaking the 200-freestyle and Freeman capturing the 400-individual medley as well as third place.

The final day of competition brought about the same level of excitement. Lyman secured a conference victory in the 1650-freestyle. Her time was a national qualifying time and she will continue on to compete at NCAA. On the men’s end, Cort placed fifth overall in the 1650-freestyle. Freeman and Shapiro placed fourth and fifth respectively in the 200-breaststroke and Kiernan Jordan ’19 placed fifth in the 200-butterfly. The final day of competition consisted of an unexpected blackout during the middle of the 200-breaststroke. The meet was set back for a short period of time but it did not cause anyone to lose their drive. Everyone was still motivated to push to the end of the meet in the final session of finals on Sunday night.

In speaking with the team there are many individuals that were impressed with the swims of the weekend. Cort commented on the meet, “It was a great weekend. We had some fast times and put up a bunch of team records. We really had a strong weekend of lights out swimming.” Novitch commented as well, “It was an unforgettable weekend. Lots of great swims. We showed a lot of heart and support for eachother.”

The men and women truly had an incredible season and we wish them luck in the ones to come. We also send luck to Schmidt and Lyman who will look to continue their season at NCAAs and will train to the time of spring break.