The Dickinson College women’s soccer team topped Gettysburg College to make it into the Conference Playoffs where they fell to Johns Hopkins. 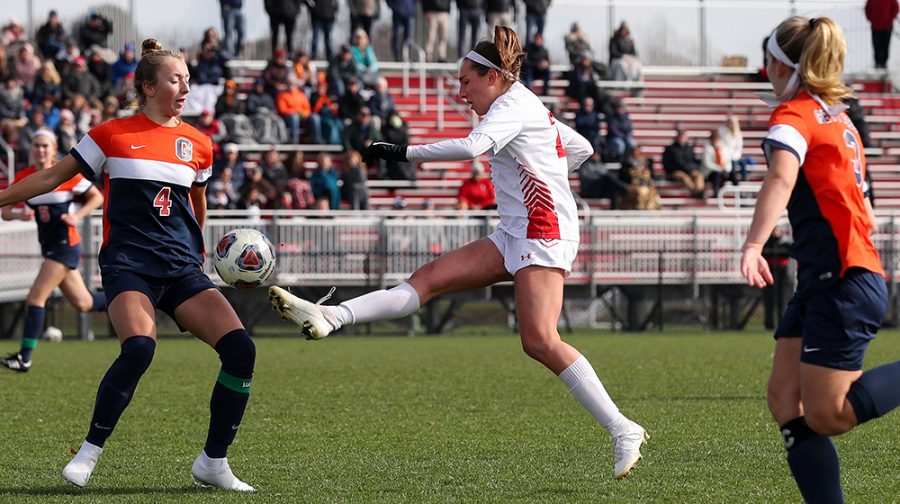 The Dickinson College women’s soccer team had a strong end to their season this past Saturday, Nov. 9 and Sunday, Nov. 10 coming in second overall in the Centennial Conference. The Red Devils hosted Gettysburg and Johns Hopkins for conference play beating The Bullets 3-0, but unfortunately falling to the Blue Jays 0-2.

The women of Dickinson were motivated and ready to go when the game started against Gettysburg. They had beaten them the previous weekend on the Bullet’s home turf, so bringing it to a  familiar place, the women were feeling strong and confident for the first semifinal game. In the first half, the women played beautifully, pulling themselves into a 2-0 lead before the half was over. Addy Zandi ’20 took advantage of a corner and served the ball right over to awaiting Meg Tate ’23 who completed it and put the ball in the net. Just a few moments later, Tate found the net again to put 2 goals on the board for the women. These two goals raised Tate’s season goal total to 18. This brought her in to a tying third place spot for the program. This is an incredible feat for a first year athlete.

The second half was strong as well. The women did not let up and made a larger gap in the score. Ally Diez ’20 scored on a penalty kick for the final goal of the game. Goaltender Carlie Boyer ’22, with a shutout, broke the school record for the most shutouts of a season, having 11 on the day. Gettysburg had taken 5 shots on the day with 2 on goal, therefore making the shut out an impressive feat.

The excitement from this game carried over into the Centennial Conference Championship match against Johns Hopkins. This game was hosted at home and brought a large crowd of Dickinson Students to carry more excitement into the game and out to the women on the field as they fought from start to finish.

Unfortunately, this game did not end as positively. Johns Hopkins scored twice in the first half and maintained this lead without anyone else on the board for the remainder of the game.

This was not without a strong game from the Red Devils who had 13 shots with 7 on goal compared to John Hopkins 11 and 7. This loss for the women brought a 14-2-4 overall total. This game unfortunately also marked just the second time this season the Red Devils have allowed more than one goal in a game and have lost for the first time since Oct. 2.

The Red Devils are not done and hope to receive a bid for the NCAA Division III tournament, which is set to be announced this upcoming Monday, Nov. 18.

The women have had an amazing season up this point with strong athletes in every class year.

The team hopes that they will continue this success into the NCAA Division III tournament where they have fought hard all season to hopefully earn a spot.

The hard work of the Red Devils has paid off and their season is not over yet.