Women’s Soccer Moves into Third Round of Tournament Play

The Dickinson College men and women’s soccer team topped Farmingdale St. and Amherest to move on to third round of NCAA III Conference. 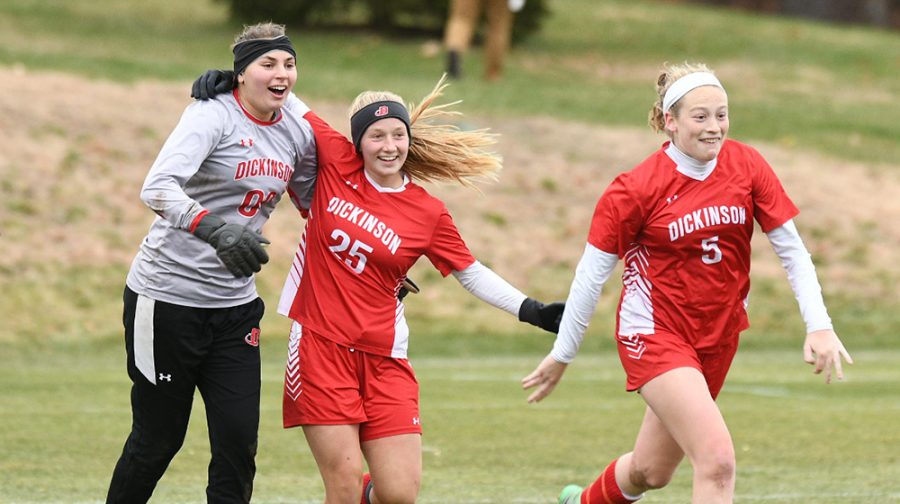 The Dickinson College women’s soccer team earned a bid to the NCAA Division III tournament. They were set to compete in their first game against Farmingdale State Saturday, Nov. 16 where they won 3-1, bringing them to the second round of competition against Amherst Sun., Nov. 17 where they also found a 1-0 win.

The weekend constituted traveling to Amherst, Massachusetts but the women were set and ready to go, coming back from their loss against Johns Hopkins the previous weekend. The women were excited to continue their season and perform to the best of their ability.

The first game against Farmingdale State started strong. The Red Devils were the first to put a goal on the board and held the lead for the remainder of the game. The goal was made by Charlotte Glancey ’22 who was able to finish an assist from Abby Zandi ’20 just over ten minutes in to the game. This goal was unfortunately answered by Farmingdale, bringing the score to a tie going into the half.

The women were not going to let the game remain this way and continued strong in the second half.

They made both goals in the final 12 minutes of the game. Med Tate ’23 made both goals for the Red Devils. He second goal was made off an assist from Elizabeth Krause ’20. This brought her season record to 20. Tate was also awarded the rookie of the year title. These two goals were ones that Farmingdale could not answer and gave them the lead to finish the game with a 3-1 win.

The next day, the women carried the determination and excitement over to face Amherst where the women played just as well. Tate again netted the one and only goal of the game with just five seconds remaining in the first half to score the one and only goal of the game. The Red Devils secured the victory but not without a fight from the Mammoths. They took a total of 24 shots with 8 on goal compared to the 10 that were taken by Dickinson with 3 on goal. Goaltender Carli Boyer ’22 played an incredible game with another shutout, her 12th of the season.

This win brought the Red Devils to tie the school record for wins in a season with a 16-2-4 record. We wish the women luck as they travel to Geneva, NY this upcoming Saturday, Nov. 23 to again face Johns Hopkins where they hope to find redemption from the Conference Championship on the road.

They will continue to train and practice throughout the week to prepare.