The Dickinson College men’s basketball team had strong in conference showings on the road as well as at home. 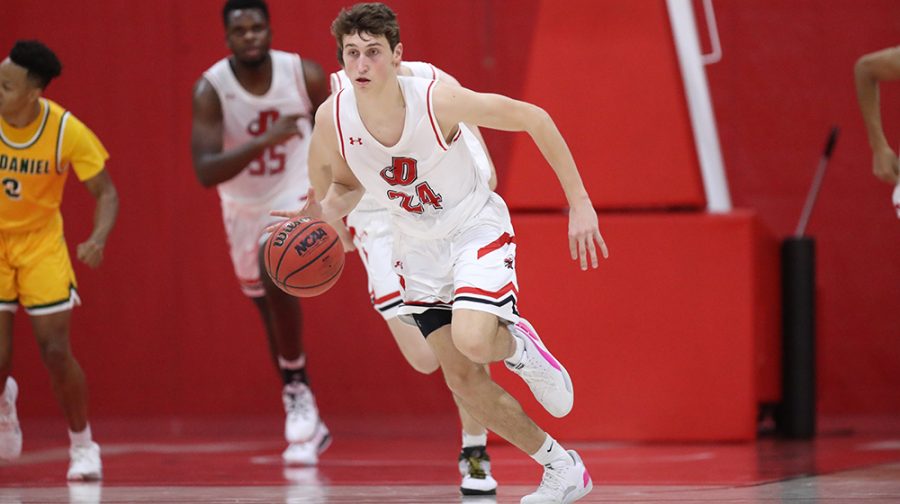 Last Thursday, Feb. 6, the Dickinson Red Devils hosted the Johns Hopkins University Blue Jays. The Blue Jays came in as favorites for the game as they were second in the Centennial Conference, but the game was a close affair.

Late in the first half, the Devils were tied when Ryan Robinson ’22 hit a three-pointer that gave them a 30-27 lead. The Blue Jays were able to take the lead by the end of the half 33-30, but only after facing stiff resistance from the Red Devils’ defense.

The Devils kept the game close in the second half as well, but their failure to completely take the momentum from the Blue Jays led to them falling 80-70. The men of Dickinson did not go down without a fight. In the final minutes of the game Jack Tierney ’22 and Bryce Allen ’20 knocked down two straight three point shots to close the gap between them and the blue jays. A shot by Robinson brought the deficit to only seven with a minute left to play. The Blue Jays put up free throws to secure their 10 point lead into the final seconds of the game.

Allen had a great performance, scoring a team high 20 points and tied for the most assists with 2. The Red Devils had 22 rebounds and 11 assists as a team. After the loss the Devils’ record stood at 2-18 overall and 2-11 in the Centennial Conference.

The following Saturday, Feb. 8, the Red Devils hosted the Ursinus College Bears. The Red Devils began with an early lead, with the score at 16-9 in their favor within the first ten minutes of the game.

This margin held throughout the first half, with their lead improving to 40-30 by the end of the half. The second half was a much tighter affair, but the Devils did not allow the Bears to retake the lead once. After the teams tied for 45 points in the second half, the final score was 85-75 in favor of the Red Devils.

Allen again posted the team high in points scored with 24 of his own and 7 assits. Tierney topped the charts for Rebounds in this game with 9. Dickinson was 50.9% from the free throw line compared to the 40.4% that Ursinus posted.

The game was a momentum boost, as the Devils were able to take a lead from the beginning, apply consistent pressure and win the game. After the game the Red Devils’ record improved to 3-18 overall and 3-11 in the Centennial Conference.

We wish the men luck as they travel to Swarthmore this upcoming Saturday, Feb. 15 for another in conference game where they will hope for continued success as they found in their previous game.