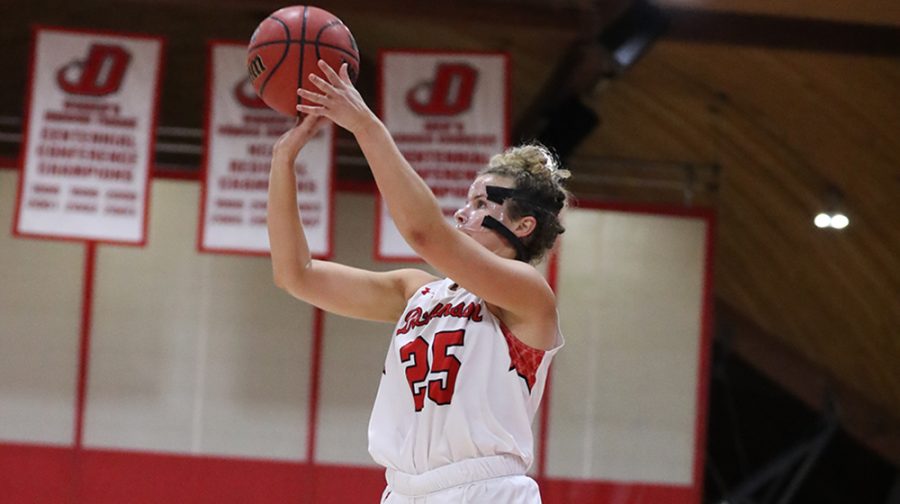 The Dickinson College women’s basketball team had three in-conference games that fell within the same week. The week began with a 59-52 win against Swarthmore on Tuesday, Feb. 4, a 66-43 win against Johns Hopkins on Thursday, Feb. 6, and a 78-49 win against Ursinus on Saturday, Feb 8. It was a very successful week for the Red Devils.

The first game of the week away at Swarthmore was the closest of the week. The game began and Swarthmore took off with a 17-9 lead in the first quarter. Swarthmore made this gap even wider going into the half with a 28-18 lead. The 10-point difference did not intimidate the women of Dickinson but instead encouraged them to play even harder. Once the second half began, Kate Deutsch ’22 and Halle Maeda ’21 scored the first 12 points of the third quarter and cut the deficit to only 5, a much more manageable feat to overcome. Maura Leverone ’23 then scored the next 7 points to bring Dickinson within 3. By the end of the third, the Red Devils were down 4 when the women of Dickinson took off in the final quarter outscoring the Garnet of Swarthmore 20-8 to secure the victory.

Leverone had a career high with 17 total points, most of the game. She also made 6 of 7 free throws, with 4 rebounds, 4 steals, and 2 assists. Deutsch followed right behind with 14 points and 6 rebounds. Maeda came in with 9 total points. The game was a success and the women hoped to carry this momentum into the rest of the week.

The momentum from the previous game was absolutely carried into the next at home against Johns Hopkins. The Red Devils were quickly in the lead with a 7-0 start due to shots completed by Deutsch and Emily Padalino ’20. This lead was maintained throughout the rest of the quarter, 13-6, as well as the half, going in to it with a 28-13 lead. The game consisted of many three pointers, the women taking turns completing shots. The lead never faltered as the Red Devils maintained it until the end of the game. Johns Hopkins matched Dickinson in scoring in the fourth quarter but it was not enough to secure victory. Padalino was the game leader with 14 points.

The final game of the week contained the same excitement and bigger leads again taking place at home against Ursinus. The women again flew out to an early lead with a 24-10 lead in the first quarter. The women of Dickinson outscored Ursinus in each quarter to hold the lead going into the half as well as going into the final minutes of the game. Leverone was again the game leader in points scored with 13.

The women reach a 12-10 record overall and a 10-7 record in the conference. The women of Dickinson will hope to continue the succ3ss that they have had throughout this week to improve their overall standing in the conference and hopefully get a bid to playoff play when the season is coming to a close. We wish the Red Devils luck as they travel to Bryn Mawr this upcoming Saturday, Feb. 15 for another in conference game.