Men’s Lacrosse Starts Their Season on a High Note Against St. Mary’s

The Dickinson College men’s lacrosse team began their sesaon with a win against St. Mary’s. 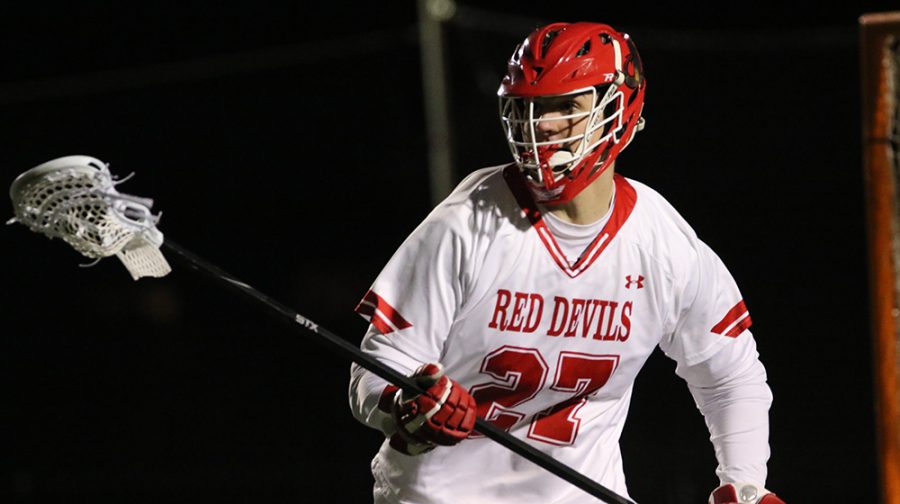 The Dickinson College men’s lacrosse team have just begun their 2020 season and hope to carry strength and momentum for the previous few seasons. For their first game, this past Saturday, Feb. 15, the men traveled to Maryland to compete against St. Mary’s at the US Lacrosse Hall of Fame where they found a 15-8 victory.

Ben Levin ’20 had a strong first quarter scoring two to bring the Red Devils into a fast 4-2 lead by the end of the first which they will maintain until the end of the game. Ryan Schaffer ’20 and Nick Goles ’20 both struck in the second period to bring their lead even further, 6-2. St. Mary’s did not back down however and landed three of their own to bring the score within one goal. Griffin Moore ’23 scored his second of the game of an assist from Skyler Schluter ’23. This brought the men to a 7-5 lead going into the half. The men were ready to continue this lead after the half was over and they did just this.

The Red Devils ran with their opportunities, being up an extra-man at three different points and scoring a total of six in the third period compared to St. Mary’s zero. This almost guaranteed the victory for the Red Devils but they didn’t stop there. Schluter scored one, Levin and Moore each found the net twice and Goles put up another as well.

In the final quarter, St. Mary’s outscored Dickinson 3-2 but this was not enough to overcome the previous deficit and the Red Devils secured victory. Levin put up another goal for a total of five throughout the game. He also had seven ground balls and caused two turnovers. Moore followed behind with four goals and Schaffer had three.

Dickinson had 59 shots while St. Mary’s had 23. Cole Pellicano ’20, goaltender, made seven saves for the Red Devils.  Although St. Mary’s topped Dickinson in face offs, winning 16 compared to Dickinson’s 10, it was not enough to find a win.

The men start the season with a win and a 1-0 record. We wish the men luck as they host their first home game this upcoming Saturday, Feb. 22 against Stevens.