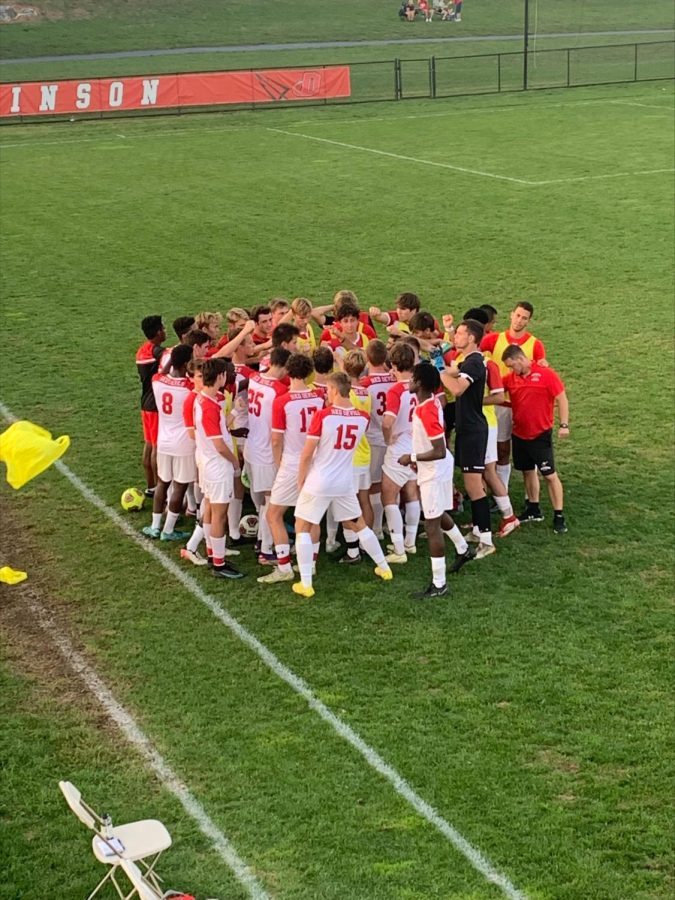 Coming into the game following their 8-0 victory over Keystone, the Red Devils were quickly knocked down a peg when the referee awarded an early penalty to King’s. Senior goalkeeper Andrew Kempe stood his ground and saved the penalty to keep the game scoreless.

“We woke up after the penalty”, said captain and center back Andrew McSlarrow ’23. King’s tested Kempe throughout the game, but were never again able to create a chance as good as the penalty.

Although Dickinson never truly dominated the match, they got on the board thanks to their dynamic and creative attacking players. Dickinson’s attack, consisting solely of underclassmen, works hard to put pressure on the opposing goal. McSlarrow said, “these kids are really, really young and they have a really bright future. It makes my job easier with the talent I’m surrounded with.”

The pressure finally paid off as Saul Iwowo ’26 found the back of the net with a header off of a perfectly weighted cross from Luke Beiles ’24 for his second goal in as many games. In the 75th minute, Dickinson put the game to bed. Following a shot on target from Tyson Burling ’25, fellow Sophomore Johnny Melancon ’25 pounced and slotted the ball in. Melancon ran to the corner near the Dickinson sideline and was swarmed by the Dickinson bench. The game ended 2-0. It was Dickinson’s second straight victory and, importantly, their second straight clean sheet.

Clean sheets are a point of pride for the team, especially after they struggled mightily to keep them last year. McSlarrow said, “as a senior on the team, my backline consists of two sophomores and one freshman. Everyone has bought into a role though. There’s more consistency within the backline. Last year, we were changing it a lot, understandably, with a bunch of losses. But there wasn’t that ability to build comradery. But now with more consistency, everyone is comfortable and likes each other and there’s more comradery within the defense, making the job much easier.” Dickinson carried their momentum into their Friday clash with Moravian with a specific goal in mind.

Before the game on Friday, McSlarrow said, “we need to do a better job in the first 5-10 minutes of a game. It’s been a common theme going back to last year and so far this year and it’s really something we need to do a better job of moving forward.” Coach Jorge Chapoy tweaked his starting lineup for the Moravian game, starting five first-years and Beiles, who had previously come off the bench for Dickinson. Beiles found the back of the net for Dickinson within the first five minutes with a well-struck shot the Moravian Goalie, Christian Beebe, couldn’t keep out. Then, within seconds, Dickinson’s high press was in full effect.

Freshman Ethan Jarden worked hard and won the ball in the Moravian half, played a great ball in the box and, once again, Luke Beiles placed the ball in the back of the net. It was a magical start for Dickinson. They completely reversed their poor start issues against a strong Moravian side. Owowo scored the Red Devils’ third goal from the penalty spot after showing impressive strength and skill to win the penalty.

Moravian came back a different team in the second half and was able to get two goals back but Dickinson held on and made it three wins in a row, more victories than they were able to get all of last year. Dickinson’s final test of the week was a Sunday game against a talented Carthage College side.

The Red Devils started strong once again when Ethan Jarden ’26 scored early off of a great ball from Chris Hackley ’25. Dickinson never looked back from there as they stayed the dominant side throughout the game.

They finally got their second goal late in the game. Iwowo, who was so lively and creative all game, pushed forward. Luke Finklestein ’26 picked the ball off Iwowo. His shot was saved, but the ball fell perfectly for Cole Jennings ’24 who tapped it into the wide open net, securing the victory for Dickinson.

Dickinson secured another well deserved clean sheet. The Dickinson  back line looked very organized, keeping their third clean sheet of the season. The Red Devils prevented any chances on Kempe’s goal, often winning the ball back in the midfield before Carthage could even mount an attack.

McSlarrow said, “we are going to be a very physical team, it’s a lot more appealing to see the way we play now with our high press and high intensity and will to fight. Our mentality is to win each and every game, and I think it’s going to be very exciting and an incentive for people to come watch us play.”