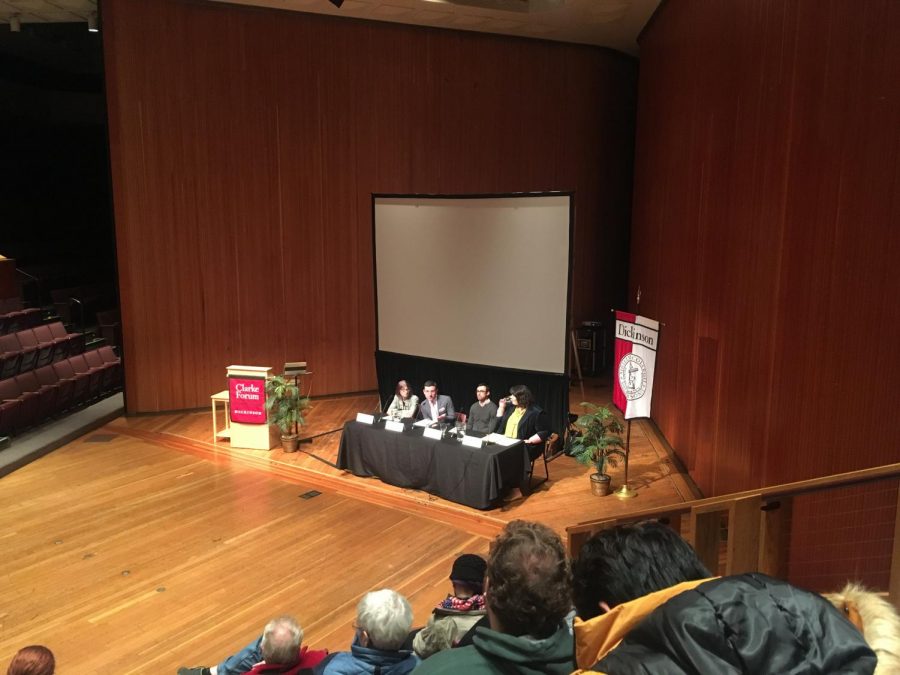 As talks of President Donald Trump’s impeachment circulates through U.S. media outlets, Dickinson College professors participated in a panel discussion on the history, ethics and methods of impeachment. The panel received mixed reviews from students.

Heard opened the discussion by talking about the development of the impeachment process during the drafting of the U.S. Constitution. She noted that impeachment is “often regarded as one of the most powerful tools of the legislative branch,” added “Impeachment is a bit of an odd duck.” Additionally, Heard explained the vague language of Impeachable offense of a President which include treason, bribery and “other high crimes and misdemeanors,” and said that impeachment is “fundamental to maintaining the political integrity of society.”

Media coverage and interpretation of impeachment circulated through the panel. Steirer asserted the mixed position of the media in informing the general public about impeachment proceedings and contents and noted that, “the media seems to be contributing to a healthy dialogue about impeachment,” but he warned that, “We have also had disinformation campaigns.” Steirer said that, despite the health of the media on the whole, “the media in a poor state, and the public sphere is not working well.” However, “we might be thinking about media wrong,” Steirer argued, noting the proliferation of small scale independent media organizations which “in general, these are people who are trying to communicate not for the goal of money, but for some purpose [of discourse].” Steirer added “we need to rethink our model of what it means to participate in a liberal democracy.”

O’Connell furthered the discussion of impeachment in the media with an explanation of its normalization in society. According to O’Connell, current discussions of impeachment are not wholly unprecedented, but American political discourse has been drifting towards a lower impeachment threshold. “We’ve been building to this point. Trump’s impeachment,” O’Connell said and continued that impeachment has “larger political forces at work.” He expressed doubt that Trump will be removed from office but said that, “a trial is inevitable at this point.”

Feldman observed that “we have a morass of charges, and we have a morass of interests here.” Feldman drew a distinction between loyalty and fidelity, the former being allegiance to the individuals holding power, the latter being allegiance to the office itself. Loyalty “forces us to make uncomfortable choices,” Feldman observed, “it is a relation between people.” Feldman noted however the dangers of defending offices when public support rests with the individual. Although “the call of loyalty can be very strong,” Feldman noted that the strength of this creates the result that “ethical dilemmas arise when values come into conflict.” “Loyalty to one’s leader may conflict with fidelity,” Feldman noted, “loyalty and code of the street, or fidelity and rule of law.”

During the discussion portion, while responding to a question of the implications of a situation where Trump is impeached, but not removed from office, Heard stated “I’m just not sure, […] because it such a rare process. I think that if he is ultimately impeached, I think it might be more fraught at that point. I don’t know if he would go willingly.”

“I do worry that this kind of corruption has been normalized,” Feldman added, “I’m afraid the that United States is becoming Russified, and the acceptance of lying in the body politic. More and more citizens are becoming used to shrugging their shoulders” when they hear Trump “spouts palpable falsehoods.”

Some students appreciated the information presented in the panel. Jordyn Ney ’23 said she liked the “non-partisan” presentations of O’Connell which provided her with “the information I need to draw a more well-rounded opinion.” Cooper Wingert ’20 shared the sentiments of Ney and said that he “left with new ways to think about the impeachment inquiry, from regarding it as a deep-rooted question of an ethical nature to situating it in the context of increasing polarization.”

Other students wished that the panel included different political opinions on Trump’s impeachment. Christopher Burrow ’20 said he wished the panel had a “politically dissenting voice, if only in the service of facilitating debate.” Luke Denver-Moore ’23 added that the panel was informative but that he did not think it went “into the substance that much” and that he wished for more opinions. “I would have appreciated a few more details on the topic, and a few more opinions,” Denver-Moore added.

“Perspectives on Impeachment” was sponsored by the Clarke Forum for Contemporary Issues and hosted on Wednesday, Nov. 6 at 7 p.m. in ATS.